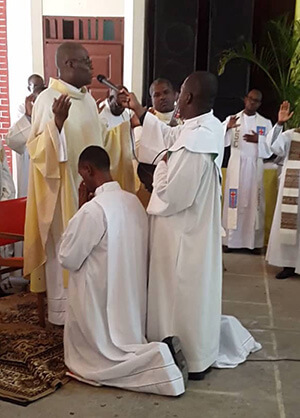 On Saturday, September 9, just after Hurricane Irma had skirted Haiti’s northern coast, bringing rains and strong winds, the Congregation of Holy Cross gathered in Cap-Haïtien to experience a downpour of God’s grace and the winds of his Spirit. That morning, in a combined celebration, three novices made their First Professions of Vows and two seminarians made their Final Professions of Vows.

To receive the large crowd of Holy Cross sisters, brothers, priests, as well as family members and friends of the men professing vows, the Mass was held in the Auditorium of the College Notre-Dame du Perpétuel Secours. It was to this school that the first Holy Cross missionaries from Canada arrived 73 years prior, on September 8, 1944.

The men professing vows chose as the theme for the celebration the lines of Jesus speaking of his mission in the Gospel of Matthew: “Not to be served but to serve” (cf Matthew 20:28). 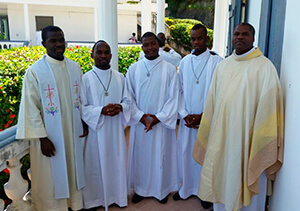 The first to profess were the three novices, who had completed their Novitiate year at the La Solitude Saint-Joseph, which is situated between Labadee and Cap-Haïtien and majestically overlooks the Atlantic Ocean. They are: Mr. Rigolex Doréus, C.S.C., and Mr. Brunel Victorin, C.S.C., and Mr. Rousnel-Vichinsky Voltaire, C.S.C. Their vows were received by Fr. Eric Jasmin, C.S.C., Superior of the Our Lady of Perpetual Help Province (Port-au-Prince, Haiti), who also presided at the Mass.

These three newly professed were the first class of novices for the new Novice Master, Fr. Joseph Keith Louidor, C.S.C. He is assisted at the Novitiate by Fr. Guilny Ismenor, C.S.C. 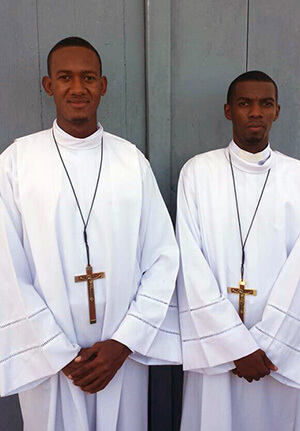 After the three novices had made First Profession, it was time for the two seminarians—Mr. Guerlin Bazile, C.S.C., and Mr. Luc-Franck Jean-Pierre, C.S.C.—to make their Final Profession of Religious Vows according to the Constitutions of the Congregation of Holy Cross. Both had recently completed their theological studies in June.

Like the novices, Mr. Bazile and Mr. Jean-Pierre professed their vows to Fr. Jasmin. Following their professions, they were received a sign of welcome and peace from the many Holy Cross sisters, priests, and brothers gathered for the occasion.

After the Mass concluded, here was a reception at the college for the invited guests. It was a simple, yet festive moment to share the joy of the First and Final Professions.

Having professed their temporary vows, the three newly professed seminarians have moved to the Congregation’s Scholasticate in Port-au-Prince, where they will continue their initial formation and begin their philosophical studies. 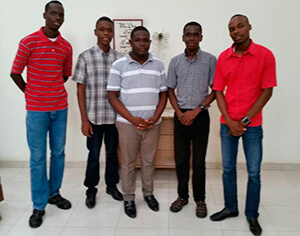 Replacing them at the La Solitude Saint-Joseph are five new novices, who recently completed their Postulant Year in Fort Liberté, which is on Haiti’s northeastern coast, where they were under the guidance of Fr. Jacquy Dagobert, C.S.C., Director of Postulants. The five new novices were officially received into the Holy Cross Novitiate by Fr. Louidor and Fr. Isemnor the afternoon of Friday, September 1.

As for Mr. Bazile and Mr. Jean-Pierre, the newly finally professed, they are awaiting their Ordination to the Diaconate on Friday, September 15—the Feast day of the Congregation’s Patroness, Our Lady of Sorrows, and this year the 10th anniversary of the beatification of Blessed Basile Moreau, the Congregation’s founder.

Jean Pierre Sagesse, C.S.C., will be ordained a priest. Deacon Sagesse made his Final Profession of Vows and was ordained a deacon during Holy Week earlier this year.

Thus, the season of joy and new life for the Congregation in Haiti continues these days.