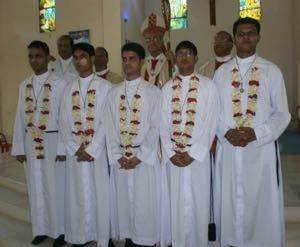 Brothers Bernard Bikash Costa, C.S.C., Rinku Hubert Costa, C.S.C., Bhuban Benjamin Costa, C.S.C., Joy Xavier Rozario, C.S.C., and Sonet Francis Rozario, C.S.C. made their Final Profession of Vows in the Congregation of Holy Cross on October 31, 2014. All five are members of the St. Joseph Province (Dhaka, Bangladesh). They professed forever their religious vows of poverty, chastity, and obedience at St. Nicholas Tolentino Parish, Nagori, which is one of the oldest churches in Bangladesh although the current building is newer.

The Most Rev. Patrick D’Rozario, C.S.C., Archbishop of Dhaka, was the main celebrant at the Mass of Final Profession, and Br. Harold Bijoy Rodrigues, C.S.C., the Superior of the St. Joseph Province, received the brothers’ vows.

This class of five Final Profession follows on the heels of 14 brothers professing Final Vows in Banladesh for the St. Joseph Province in 2013. 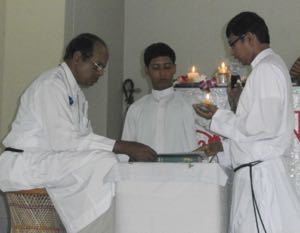 "God continues to bless the congregation by calling these young men so that his work to build the kingdom can also be continued,” said Br. Rodrigues.

As a preparation for their Final Profession, the five brothers participated in a special prayer service that began at St. Anthony’s Chapel, Panjora, on the afternoon of October 30. The men were brought from St. Anthony’s Chapel to the St. Nicholas School campus with a colorful procession.

The procession was followed by a Purification and Blessing Ceremony according to local custom. The holud (turmeric), which is a symbol of purification, was blessed by Fr. Albin Gomes, the Parish Priest of Nagori. The candidates were purified symbolically by the priests, brothers, sisters, and relatives present who put holy turmeric paste on the hands of the brothers who were to take Final Vows. The men then went and took a ritual bath. After their bath, they were blessed by Br, Rodrigues and parents of the candidates.

For the Mass of Final Profession, the five men were joined by their families as well as many of their brothers in the St. Joseph Province, including the province’s aspirants and men in formation. Many Holy Cross priests and a number of diocesan priests and other religious priests attended and concelebrated the Mass. There were also  many religious sisters present from various congregations. All of these guests joined the five newly finally professed Holy Cross brothers for a reception and a banquet following the Mass. 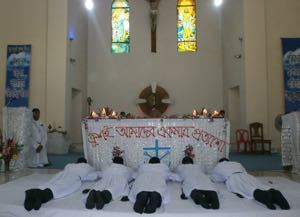 Now, following their Final Professions in the Congregation, the five brothers will continue in fulltime ministry in Holy Cross. In keeping with the Congregation’s charism of being Educators in the Faith, all of them will spend at least part of their time working in schools.

Br. Bernard Bikash Costa will be the Assistant Director in Pabitra Krush Jnanatapasalaya and work as a part-time teacher at St. Joseph Higher Secondary School in Mohammadpur, Dhaka.

Br. Rinku Hubert Costa will be a faculty member and teacher at Tomilia Boys High School, in Tomilia, Gazipur.

Br. Bhuban Benjamin Costa will be a faculty member and teacher at Bandura Holy Cross High School in Hashnabad, Dhaka.

Br. Joy Xavier RozarioFaculty will be a faculty member and teacher at Miriam Ashram High School in Diang, Chittangong.