On Friday, April 28, more than 700 people showed up at the Holy Cross Scholasticate in Rampura, which is part of the Bangladeshi capital of Dhaka, to participate in the Final Professions of five members of the Congregation of Holy Cross. It was a prayerful and joyful celebration for all present, including family, friends, and religious men and women. 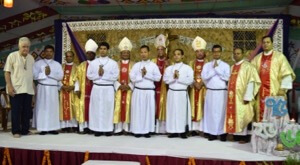 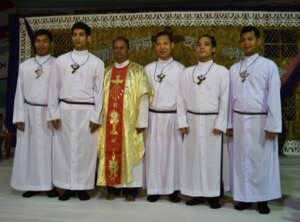 In his homily, Cardinal D’Rozario, the first cardinal in the history of the Bangladeshi Church and only the second cardinal in the history of the Congregation of Holy Cross, spoke about his appointment letter from Pope Francis, selecting him as a cardinal. The pope told him that now many people would look at him and that he would realize that it was Jesus looking at him through those people.

He encouraged the young men to see the gaze of Jesus in the people they were serving, as this gaze of Jesus would help them live the gospel values and their vows as Holy Cross religious. This personal relationship with Jesus is essential, the Cardinal said.

The Litany of the Saints followed the Cardinal’s homily, imploring the intercession of the saints for the five young men about to make their Final Religious Vows of poverty, chastity, and obedience. Then each of the five men made their Final Profession of Vows to Fr. James Clement Cruze, C.S.C., Superior of Sacred Heart of Jesus Province. Their professions made the Liturgy of the Eucharist that followed a true act of thanksgiving. 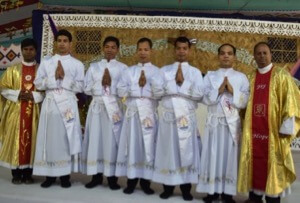 The following day, in the same chapel of the Holy Cross Scholasticate, the same five young men were ordained to the deaconate by the Most Rev. Shorot Francis Gomes, Auxiliary Bishop of Dhaka Archdiocese. Once again, a sizable crowd of people was present for the Deaconate Ordination, including many Holy Cross sisters, brothers, and priests.

View a Photo Gallery of Final Vows Around the World

Just a few months back, the Sacred Heart of Jesus Province celebrated the Ordinations of Fr. Ruben Manuel Gomes, C.S.C., on December 28, 2016, and Fr. Nicholas Nitarson Nokrek, C.S.C., on February 3, 2017.

Digonta Denis Chambugong, Gracy Isubious D'Rozario, Robert Robi Nokrek, Gourav Graner Pathang, and Kevin Louis Kubi are now the next in line for Holy Cross in Bangladesh to be ordained hopefully to the Ministerial Priesthood.

Special thanks to Fr. Swapan Das, C.S.C., of the Sacred Heart of Jesus Province for assistance with this article.