The Congregation of Holy Cross in Bangladesh celebrated two priestly ordinations to end 2016 and begin 2017. Fr. Ruben Manuel Gomes, C.S.C., was ordained December 28, 2016, and Fr. Nicholas Nitarson Nokrek, C.S.C., on February 3, 2017. Both are members of the Sacred Heart of Jesus Province (Dhaka, Bangladesh). 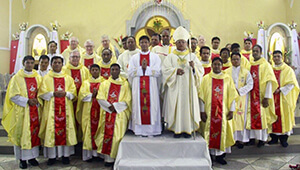 Fr. Gomes’s Ordination took place in his home parish of Our Lady of Guidance in Padrishippur, Barisal. He was ordained to the priesthood by the Most Rev. Lawrence Subrata Howlader, C.S.C.

After the Ordination, there was a great celebration with many Holy Cross religious, relatives, friends and parishioners. Many of them were also present the following day, December 29, when Fr. Gomes celebrated his Mass of Thanksgiving.

Fr. Gomes has been assigned to Fatima Rani Church, in Bandarban, in the Archdiocese of Chittagong. 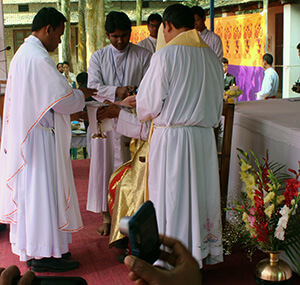 Fr. Nokrek was also ordained by a Holy Cross bishop, the Most Rev. Paul Ponen Kubi, C.S.C., Bishop of the Diocese of Mymensingh. The Ordination was held in St. Paul’s Church in Pirgacha, Tengail, Mymensingh.

Fr. Nokrek is the first priest from St. Paul’s Church, since the parish was founded in 1992 by the great Holy Cross missionary Fr. Eugene E. Homrich, C.S.C.

Attending the Ordination were over 80 priests, as well as many religious, family members, and parishioners from neighboring parishes. The following day, February 4, Fr. Nokrek offered his first thanksgiving mass in his village of Beduria.

Fr. Nokrek will begin his priestly ministry at The Church of Our Lady of Presentation, in Bilipara, Bandarban, in the Archdiocese of Chittagong.