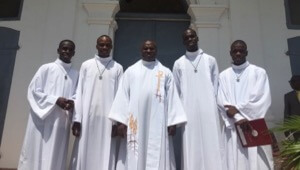 Sunday, September 9, 2018, was a day of joy and hope in the Province of Our Lady of Perpetual Help in Haiti. After a year of formation in the Holy Cross Novitiate, four novices made their First Profession of Religious Vows in the Congregation: Mr. Faunex Dorvil, C.S.C.; Mr. Wisly Jean, C.S.C.; Mr. Max Allen Victor, C.S.C., and Mr. Alkinel Saint-Fleur, C.S.C. With their professions, the Haitian Province now has 17 temporarily professed seminarians.

Fr. Eric Jasmin, C.S.C., Superior of the Province, presided over the Mass of First Profession and received the Religious Vows of the newly professed. He was accompanied around the altar by eight concelebrants, including the Novice Master, Fr. Joseph Keith Louidor, C.S.C., and the Assistant Novice Master, Fr. Guilny Ismenor, C.S.C. Also assisting at the altar was Deacon Ginel Pierre, CSC, who was ordained a deacon back on June 24, 2018. 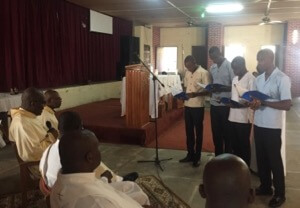 Other Holy Cross religious, including Holy Cross Sisters from Notre-Dame College, were present in the assembly, joining the relatives and friends of the newly professed.

In part of his homily, Fr. Jasmin focused on what constitutes the essence of religious life, especially the diligence in prayer for a good living of the evangelical counsels. Prayer, he said, is a way of renewing in love one’s daily yes to the one who calls us to follow him. He characterized religious life as a big yes full of little yes’s that we must say at every moment. He ended by thanking the newly professed for the gift of their life to the Lord. 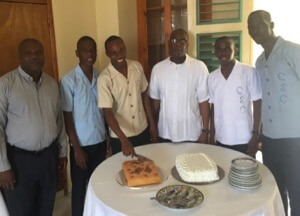 Following the Mass of First Profession, which was held at the Congregation’s College Notre-Dame du Perpétuel Secours in Cap-Haïtien, there was a reception to celebrate and give thanks with the newly professed.

In addition to the newly professed who are moving on from the Novitiate to the House of Formation in Port-au-Prince, Fr. Gilny is also moving on from the ministry of Assistant Novice Master to serve at the Collège Notre Dame du Perpétuel Secours. The Novitiate, however, will not be empty as three young men from the Postulant Program in Fort Liberté are entering the Novitiate for the 2018-2019 school year.

Special thanks to Fr. Luc-Franck Jean-Pierre, C.S.C., for assisting with this article.