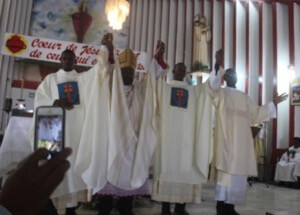 The weekend of June 23-24 was a weekend of hopeful and joyful celebration for the Congregation’s Our Lady of Perpetual Help Province in Haiti.

On Saturday, June 23, the Holy Cross family, including many Holy Cross sisters, gathered with the friends and family of Mr. Ginel Pierre, C.S.C., to celebrate his Final Profession of Vows in the Congregation.

As is the usual tradition for Holy Cross community in Haiti, the Mass of Final Profession was held in the auditorium of the College Notre-Dame du Perpétuel Secours in Cape-Haïtien. It was to that school that the first Holy Cross missionaries arrived from French Canada in 1944, making it the Mother House and focal point of the Province and its ministry in the country.

Learn more of the history of Holy Cross in Haiti

Fr. Eric Jasmin, C.S.C., Superior of the Province, presided at the Mass and received Pierre’s Profession of Final Vows. In his homily, Fr. Jasmin highlighted the deep meaning of Ginel’s commitment for the mission of Holy Cross in the world. 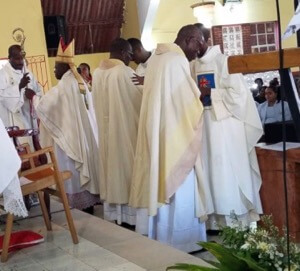 The celebrating was not over, however, as the following day, June 24, the Solemnity of Saint John the Baptist, the Holy Cross family gathered again, this time in Sacred Heart Parish in Cape-Haïtien, to celebrated ordinations to the diaconate and the priesthood.

Coming for the Ordination Mass was Holy Cross Bishop Yves-Marie Péan, C.S.C. The Most Reverend Péan is Bishop of the Diocese of Gonaïves in Haiti.

Fresh off his Final Vows from the day before, Ginel Pierre was ordained to the diaconate. In the same ceremony, Bishop Péan also ordained Deacons Guerlin Basile, C.S.C., and Luc-Franck Jean-Pierre, C.S.C., to the priesthood.

Both men had previously professed their Final Vows on September 9, 2017, and been ordained deacons on September 15, 2017, as part of the Province’s celebrations of the 10th Anniversary of the Beatification of Fr. Basile Moreau, the founder of the Congregation.

The bishop's homily emphasized the configuration to Christ priest and servant. He reminded the men being ordained of the deep and sacred meaning of the Sacrament of Order and its characteristic functions. In particular, Bishop Peán warned against a mediocre priesthood, because he says there is no priesthood at a discount. 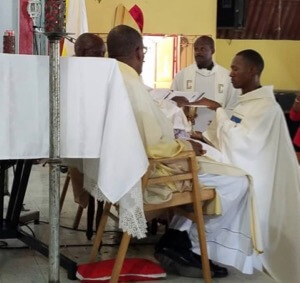 Expressing gratitude on behalf of the three men ordained, Fr. Luc-Franck said, “This Deus semper major (this God who is always the greatest) has called us and consecrated to be following Christ: humble servants of the Gospel, pastors of his people. As religious of Holy Cross, spiritual sons of the Blessed Father Basile Antoine Marie Moreau and worthy sons of the Church, One, Holy, Catholic and Apostolic, the Lord sends us to the heart of the world to proclaim his mercy to all by accompanying the poor and the afflicted on the way to His Kingdom."