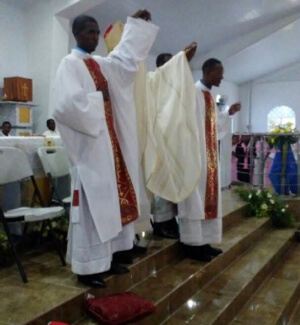 The celebrations continued in Haiti for the Congregation of Holy Cross. One week after having celebrated the First Professions of three novices and the Final Professions of two seminarians, the Our Lady of Perpetual Help Province gathered again on September 15, this time in Port-au-Prince to celebrate Ordinations.

The Ordinations were a way for Holy Cross in Haiti to celebrate the feast of the Congregation’s patroness, Our Lady of Sorrows, as well as to mark the tenth anniversary of the Beatification of Blessed Basile Moreau, the Congregation’s founder. 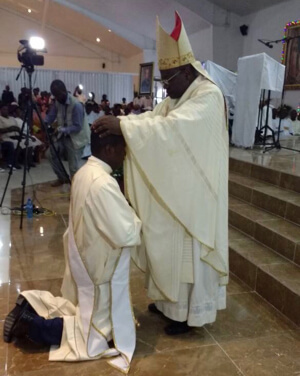 The Ordination Mass was held at Our Lady of Guadalupe Parish, which is located near the Congregation's House of Formation in the capital city. The Most Rev. Yves-Marie Pean, C.S.C., Bishop of the Diocese of Gonaïves, presided at the Mass.

Per the combined rite, the two deacons were ordained first. Then Deacon Sagesse was ordained a priest.

A festive celebration followed the Mass of Ordination. The celebration continued until Sunday, September 17, when Fr. Sagesse celebrated a Mass of Thanksgiving in the Chapel of Sacred Heart College, where he had studied as a youth before entering Holy Cross.

Having completed their theological studies, the two nearly ordained deacons have been given full-time ministry assignments. Deacon Bazile will reside at the Scholasticate in Port-au-Prince while working as a Pastoral Assistant at Fr. Basile Moreau School, which was rebuilt entirely following the earthquake in 2010. Deacon Jean-Pierre will serve as executive secretary to the provincial administration. 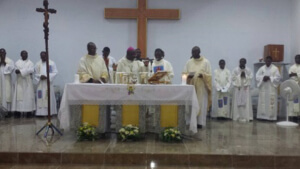 As for Fr. Sagesse, this past year he served at Mary Magdelene Parish in Duchity, a parish in Southern Haiti founded by Holy Cross. For his first assignment as an ordained priest, he is being sent to St. Charles Borromeo Parish in Le Borgne in Northern Haiti, where he will serve as Parochial Vicar and assist in the school.