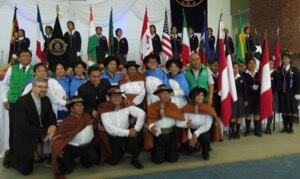 On Saturday, December 15, the Congregation of Holy Cross gathered to remember, celebrate, and give thanks for the 55th Anniversary of its arrival to Peru. The commemorative Eucharist was held in the Fr. David Farrell C.S.C., Pavilion of Fe y Alegría 25 School, and Fr. John Phalen, C.S.C., Superior of the District of Peru, presided and preached.

There was also a wide cross section of lay people, male and female, young and old, who have accompanied and been accompanied by Holy Cross since its arrival in 1963. Also present were members of other religious congregations who have collaborated with Holy Cross over the decades. 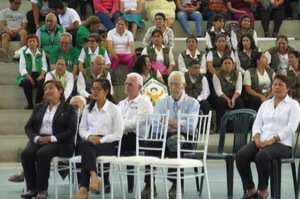 “For fifty-five years Holy Cross has had the privilege of accompanying a wonderful Peruvian people,” proclaimed Fr. Phalen at the start of the Mass. “We have been blessed by laity, women and men, and Holy Cross Sisters who walk with us and encourage us and whose practice of the charism of Blessed Father Moreau inspires us! Thank you for the part that you have played in our journey of 55 years here in Peru.”

In his homily, Fr. Phalen focused on the Biblical images of fire and rock in weaving and telling the story of Holy Cross in Peru.

“In 1963, some five years before the Conference of Latin American Bishops in Medellin, Holy Cross arrived at Cartavio, near Trujillo in the North of Peru. It took a lot of fire on the part of the Provincial Superior, Fr. George DePrizio, C.S.C., who decided to send three priests, of whom only one could speak Spanish, responding to the invitation of Pope Pius XII to help the Church of Peru, and the more specific invitation of Mr. J. Peter Grace, to be chaplains to those who worked in his sugar hacienda. Mr. Grace, a business man, was the helper of the now Venerable Fr. Patrick Peyton,” preached Fr. Phalen.

Learn more about the history of Holy Cross in Peru

Fr. Phalen went on to tell how Holy Cross moved out from Cartavio to new missions in Chimbote, Canto Grande (which continues today as the focus of the Congregation’s mission in Peru), Puno, Tacna, and Huaycán. 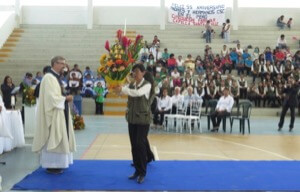 “Fr. Robert Plasker, C.S.C., assisted by Fr. Robert Baker, C.S.C., founded the Parish of The Lord of Hope here in San Juan de Lurigancho [Canto Grande] in 1976. Their logo, or seal, was the rock, a figure that appeared frequently in homilies as well as in their attitude toward their pastoral work,” said Fr. Phalen. “Fr. Plasker wished to build this house upon rock, and so it was. From the gigantic rocks which speak in Cuzco, to the musical group, “Living Rocks”, the two Roberts inspired a firm loyalty among the laity and religious which has been extended even to today.”

In cataloging all that Holy Cross had done in collaboration with the laity over its 55 years, Fr. Phalen concluded, “It seems that God wants us to accomplish a great deal with the help of his grace. But we are only called to prepare the way, like John the Baptist, the new Elijah. We are not the Messiah. Only Jesus is the Messiah. We are but his unworthy servants, and we have much to learn from the same people we are called to serve. … You encourage and inspire us to continue serving!” 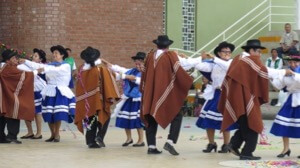 The Mass had begun earlier with a celebration of Holy Cross’s internationality. The flags of each country in which Holy Cross serves today were processed in as part of the opening procession. The Mass then concluded with a celebration of Peruvian culture. Various traditional dances from the country were performed following the closing procession, captivating the people and earning their applause. There was also some typical Peruvian food for people to enjoy. 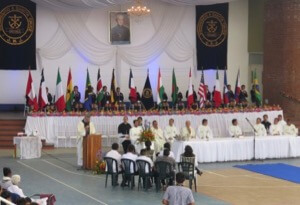 The new unified District of Chile-Peru presents opportunities for more collaboration and dynamism between the Congregation's ministries in the two countries as well as in vocation promotion and initial formation. It is also a concrete step to continue crossing "borders of every sort" in proclaiming the Good News of Jesus.

Speaking about the future, Fr. Phalen concluded his homily by saying, “May our commitment after 55 years grow until it burns like a fire in our hearts as it did for the Lord Jesus, who John the Baptist told us would baptize with the Spirit and with fire. And may our rock always be that same Jesus who comes as Emanuel, God with Us!”