It was a particularly festive and joyful ringing in of the New Year for the Congregation of Holy Cross in East Africa in 2019. Gathered in Jinja, Uganda, for its annual assembly as is its custom following Christmas, the Holy Cross community celebrated the 60th anniversary of the arrival of the Congregation to the region. 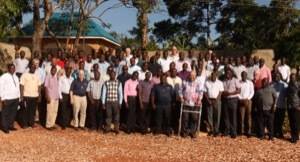 The first group of Holy Cross missionaries, which consisted of four priests, arrived to Uganda on November 4, 1958, at the invitation of Propaganda Fide. They were led by Servant of God, Fr. Vincent J. McCauley, C.S.C., who later became the first Bishop of the Diocese of Fort Portal. Within a year, they were joined by three brothers. From there, the Holy Cross community and mission spread to Kenya in 1978 and Tanzania in 2000.

Over the following days of the Assembly, longtime missionaries Br. James Nichols, C.S.C., and Fr. Richard Potthast, C.S.C., shared their reflections and experiences of witnessing the evolution of the Congregation of Holy Cross in East Africa. Later, Fr. Fulgens Katende, C.S.C., spoke on vocation, and how the Holy Cross charism and mission is lived in East Africa today. Fr. James Burasa, C.S.C., a former Superior of the District, also facilitated a reflection on the desired religious renewal of the District as it looks forward to celebrating 75 years. 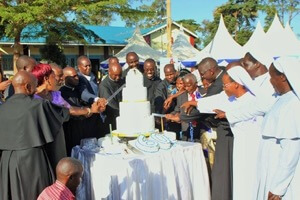 As the Assembly celebrating the 60th Anniversary came to a close, on New Year’s Eve the Holy Cross community geared up to celebrate its future in a concrete way. That afternoon, ringing in not only the New Year, but also the future of the Holy Cross community and mission in East Africa, the Congregation celebrated the Final Professions of eight young men of the District.

The Mass was held at Holy Cross Bugembe Parish, and Fr. Lies presided and preached at the Mass.

“We have much to be grateful for this day,” said Fr. Lies in his homily. “First, we rejoice that for sixty years, Holy Cross religious have had a hand in bringing the Christ to this region of East Africa—men and women who have worked tirelessly  to make God known, loved and served. And, as if to punctuate that commitment of ours  and God’s blessings us through it, we celebrate, too, the Final Profession of eight of our brothers in Holy Cross—Francis, Gabriel, Godfrey, Andrew, Julius, Stephen, Ponsiano and Stephen—and their decision to cast their lot with us in those efforts to be bringers of the Christ.”

Picking up on the theme of the Incarnation, Fr. Lies continued: “A day like this necessarily challenges us too, for it calls us—Holy Cross religious and all who are gathered—to ask what each of us is doing to incarnate Christ, to make him real.    How are we bringing the healing and hope of Jesus to others? How are we bringing his compassion and love, his mercy and forgiveness? How are we helping God to break into our world today? Indeed, how are we letting him break into our own hearts? 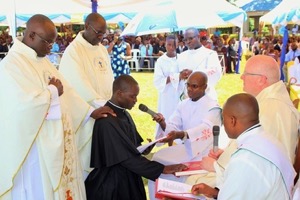 “As we call forth you—our brothers who will profess final vows today—we ask you the same questions because what is asked of you is an echo of what was asked of Mary in the first place. Will you carry the Christ? Will you make God known, loved, and served here, in this place, and every where you go? Wil you help to break God into our frail humanity and renew it for all time?” continued Fr. Lies. “Through her ‘yes’, Mary gave herself as the chalice into which the life of God was poured. What Mary did is what you are meant to do—what we are all meant to do, every day, no matter where we are or what the circumstances of our life.

“We are like empty vessels willing and ready to be filled with the life of God. Cleaned out in the process, we are poured out for others. We will do this much more by who we are than by what we say,  and by offering our own ‘yes’ to be servants of the Lord,  as you, my brothers, do through your vows today,” said Fr. Lies. 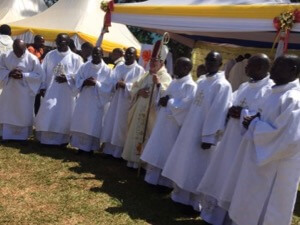 After the Mass, there was a grand celebration, giving thanks both for the 60 years of ministry and community in East Africa as well as for the eight new finally professed religious.

Read about other Final Professions in Holy Cross

The festivities, however, were not yet over as the following day, January 1, the Holy Cross community gathered to celebrate all over again, this time for Ordinations. The Most Rev. Arthur J. Colgan, C.S.C., Auxiliary Bishop of the Diocese of Chosica in Peru, came to preside at the Mass, which included the Ordinations to the Deaconate of the eight men who professed Final Vows the day before as well as three Ordinations to the Priesthood. 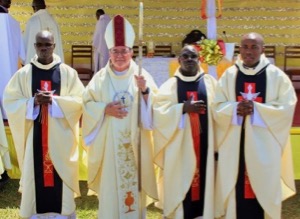 They had previously made their Final Profession of Vows on May 19, 2018, along with their two classmates who are brothers: Br. Adolf Mugume, C.S.C., and Br. Benard Omukuia, C.S.C. That celebration was held at the Congregation’s Bishop McCauley House of Formation in Nairobi, Kenya. The three seminarians were then ordained deacons by the Most Rev. David Kamau, Auxiliary Bishop of the Archdiocese of Nairobi, on May 20, 2018.

Reflecting on these days of remembrance, thanksgiving, celebration, and looking forward to the future, Fr. Binaka said, “Since 1958, many gallant men of Holy Cross left their countries and came to serve in East Africa. Later, they were joined by the Sisters of the Holy Cross. We see the footprints of these men and women in ministry in parishes, schools, seminaries and health centers. In their vocation, they have evangelized, promoted the development of peoples. Some of them are still here with us. What a great gift of faith, love and generosity!

“I would like to take this opportunity to congratulate all the members of Holy Cross, brothers, priests, and sisters who are currently serving in East Africa," Fr. Binaka added. “I also thank all the men and women whose generosity has contributed to the life and success of the mission, which the Lord entrusted to our dear Congregation in East Africa. Thank you for your support, care and love. Indeed, we have grown and we will continue to grow, serving in the Lord’s mission.”