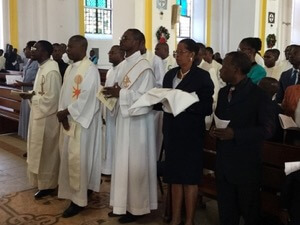 The Our Lady of Perpetual Help Province of the Congregation of Holy Cross had the most joyous closing to its annual Provincial Assembly, which was held from December 26-28, 2018, at Collège Notre Dame in Cap-Haïtien. On the morning of Saturday, December 29, the community celebrated the Priestly Ordination of Deacon Ginel Pierre, C.S.C.

Deacon Pierre had previously made his Final Profession of Vows in the Congregation on June 23, 2018, and had been ordained to the deaconate the following day.

The Most Rev. Launay Saturné, Archbishop of the Archdiocese of Cap-Haïtien, presided and preached at the Ordination Mass, which was held at Notre Dame of Assumption Cathedral. He had spent the previous day participating in the Province’s Assembly, presenting on his own pastoral experience. 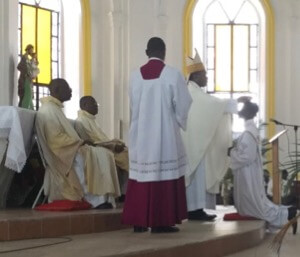 The Archbishop expressed his delight at ordaining his first Holy Cross Priest. He urged Fr. Pierre to respect the Constitutions of the Congregation of Holy Cross that unite him with his brothers and “to be a faithful, honest, and mature priest—one who is totally inhabited by God.”

Archbishop Saturné also encouraged the members of Holy Cross to accompany Fr. Pierre as he needs the faithful testimony and examples of his fellow community members in order to grow, flourish, and bear fruit in his ministry.

At the end of the celebration, Fr. Pierre expressed his own personal thanks to his family and the Congregation for their personal support over the years. Fr. Eric Jasmin, Superior of the Our Lady of Perpetual Help Province, also extended his gratitude to Archbishop Saturné for his leadership and presence with the community over the two days.

Read news of other Final Professions 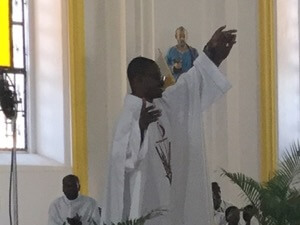 After the ceremony, the Holy Cross religious, family, and friends continued the celebration at a reception on the grounds of Collège Notre Dame.

Following his Ordination, Fr. Pierre will continue his ministry as Director of Studies at the Collège. In addition, he has recently been appointed by the provincial to be responsible for the pastoral animation of the community in the northern zone of the Province.