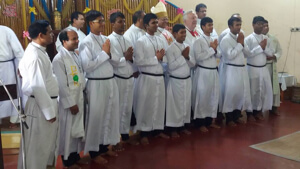 Friday, July 28, 2017, was a joyful day for the Congregation of Holy Cross in Bangladesh. Seven young men pronounced their First Vows at a Mass in the Holy Cross Pastoral and Retreat Center, which is located next to the Holy Cross Novitiate in Sagardi, Barisal.

Read about the new Novitiate in Bangladesh 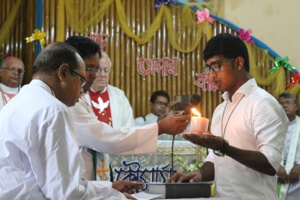 Presiding and preaching at the Mass was the Most Rev. Lawrence Subrata Howlader, C.S.C., Bishop of Diocese of Barisal. In addition to the bishop and the Novitiate staff, other Holy Cross religious as well as many priests, brothers, and sisters from other religious communities joined in the celebration. The novices were also accompanied by many of their family members, relatives, and friends.

Following the liturgy, the celebration continued with a short program, in which different people spoke to mark the occasion. Afterward, there was a festive meal for all to conclude what was an important day in the life and ministry of the Congregation in one of its oldest missions.

“Holy Cross continues to grow in Bangladesh, and we are blessed with seven young men who wish to join us,” said Fr. Gonzalves. “The willingness and the quality of the newly professed gives hope to us all.” 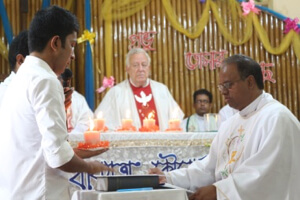 Another great sign of hope for the Holy Cross Community in the country, as well as the whole Bengali Church, is the Novitiate’s incoming class of 16 novices. They are the first class to begin their Novitiate year in the new Novitiate in Sagardi, which was inaugurated on May 19, 2017.

The Novitiate in Sagardi is a joint Novitiate, serving the Congregation’s two provinces in Bangladesh: the Sacred Heart Province (of priests) and the St. Joseph Province (of brothers).