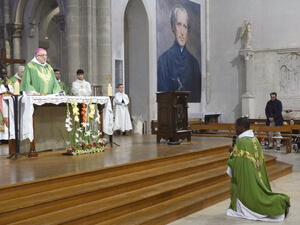 On October, 27, 2019, Fr. Paul-Elie Cadet, C.S.C., was officially installed as pastor of Notre Dame de Sainte-Croix and Rector of the International Shrine of Blessed Basile Moreau at a Mass celebrated by the Most Rev. Yves Le Saux, Bishop of Le Mans.

In a packed church with his parishioners, Fr. Cadet made his profession of faith and received the blessing of the bishop. A member of the Pastoral Animation Team gave the parish key to the Bishop, who in turn handed it over to Fr. Cadet.

In his homily, Bishop Le Saux spoke fondly of his esteem for Blessed Basile Moreau, the Congregation of Holy Cross, and the Shrine. 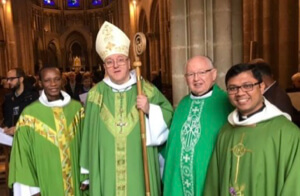 Among the concelebrants at the Installation Mass in Notre-Dame de Sainte-Croix were Fr. Robert Epping, C.S.C., Superior General of the Congregation, Fr. Romuald Fresnais, C.S.C., Superior of Holy Cross's Vicariate of France, and Fr. Joseph Gonsalvez, C.S.C., Assistant Pastor of the Parish.

After the Mass, an apéritif was shared in the presbytery, which was followed by a lunch at the Solitude of the Savior, the Motherhouse of the Marianites of Holy Cross.

Fr. Cadet replaces Fr. John De Riso, C.S.C., who was the first Rector of the International Shrine of Blessed Basile Moreau and served in that pastoral role since 2013. He returned to the United States on August 2, where he assumed a new assignment as Vocation Director of the United States Province of Priests and Brothers. 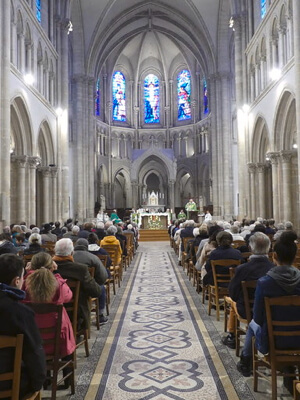 The International Shrine of Basil Moreau was inaugurated on September 21, 2014, under the direction of then Superior General Fr. Richard V. Warner, C.S.C., in order to promote the life and spiritual legacy of the Congregation's founder. The shrine is located at the Congregation's Conventual Church, Notre-Dame de Sainte-Croix, which was built by Blessed Moreau to be sign of the unity of his international religious family and now serves as his final resting place.

The Shrine’s mission includes facilitating pilgrimages from around the world to the heart of Holy Cross’s heritage and history. The Shrine also seeks to foster greater knowledge and devotion to Moreau in the local Church, especially through collaboration with the parish community of Notre-Dame de Sainte-Croix.