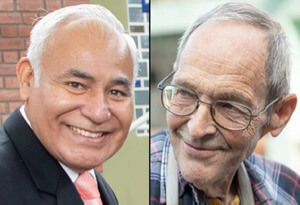 The Opus Prize Foundation recently announced that Jose Antonio Patron Quispe and Fr. Daniel Panchot, C.S.C., of Yancana Huasy in Canto Grande, Peru, are one of three finalists for its annual award.

The Opus Prize is “an annual faith-based humanitarian award, recognizing leaders and organizations that develop creative solutions to some of the world's most pressing problems. The Prize is awarded in partnership with Catholic universities, providing new opportunities to inspire the next generation of servant leaders.”

Established by Fr. Panchot and led today by Mr. Patrón Quispe, Yancana Huasy is an apostolic work of the Congregation of Holy Cross’s District of Peru. Literally meaning “House of Work” in the language of the Incas, Yancana Huasy is dedicated to integrating children and families with physical and mental challenges into public schools, faith communities, and neighborhoods. 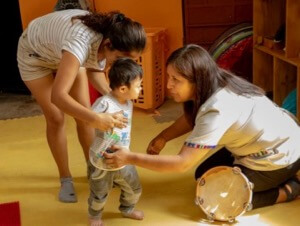 Fr. Panchot was inspired to establish Yancana Huasy in 1981 when people from the Congregation’s Lord of Hope Parish in Canto Grande approached him for assistance with family members, especially children, with motor disabilities and other special needs.

Fr. Panchot believed that responding to this need was not only essential, but also that it fit perfectly with the Holy Cross charism to serve as educators in the faith with a preferential option for the poor. Yancana Huasy would be a way to embody the Congregation's mission to educate mind and heart.

Over the next 35 plus years, through the efforts, expertise, and talents of many people, most of whom who are lay, Yancana Huasy has grown into a model both in Peru and beyond for how to care for people with physical and mental challenges, as well as their families, in a way that integrates them into the life of the surrounding community.

In this important, yet demanding work, Yancana Huasy and its dedicated and professional staff look to the inspiration of St. André Bessette, the humble, Holy Cross brother who tended the sick at the door of Notre Dame College in Montreal, Canada, and became the first canonized saint of the Congregation. St. André is the patron of the Yancana Huasy, and according to Fr. Panchot, he contributes to the “mysticism of the work.”

What makes the Opus Prize unique in many ways is the yearlong collaboration that the Foundations fosters with Catholic universities and their students and faculty in administering the prize and selecting the finalists and eventual winner. This includes visiting the sites of the various finalists and then hosting them at the university’s campus for a week of education and collaboration.

As the Foundation states, the desire is “not only to expand the humanitarian efforts of the recipient, but to inspire others to pursue lives of service.”

While, the $1 million award to the laureate and the two $100,000 prizes to the other finalists make up one of largest global faith-based awards for social entrepreneurship, “the Opus Prize is more than just an award. It's a promise to inspire students poised to impact the future. It's when faith takes root and innovation happens. It's an opportunity to champion change and be changed.”

“The Opus Prize connects Catholic universities and their students with faith-filled entrepreneurs,” states the Foundation. “The result is a mutually beneficial connection, advancing the mission of those doing good around the world by inspiring students to support global causes.”

For 2018, the Opus Prize Foundation chose to collaborate with the University of Portland, in Portland, Oregon, which is a university guided and led by the Congregation of Holy Cross.

“Hosting the 2018 Opus Prize is an incredible opportunity for UP students, faculty, staff, and the Portland community to engage with faith-inspired champions of change who are addressing the great social issues of our time—anywhere in the world—and fundamentally changing individuals, families, and communities,” stated the University in a press release.

Learn more about UP's participation in the 2018 Opus Prize

Together with the Opus Prize Foundation, the University of Portland will host all three finalists the week of November 11-15, 2018. During this week, the winner of the 2018 Prize will be announced, bringing with it the $1 million award. According to Fr. Panchot, however, Yancana Huasy is already a winner through the opportunities that being a part of the 2018 Opus Prize has already brought to the ministry.