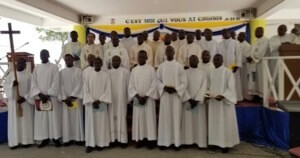 Under the theme of A Year of Grace for 75 Years of Graces, the Our Lady of Perpetual Help Province of the Congregation of Holy Cross opened its alabaster jubilee on June 27, 2019. As part of the continuing celebrations, on Sunday, September 8, 2019, the exact anniversary of the day that the first three Canadian missionaries arrived on Haitian soil in 1944, the Holy Cross community gathered to celebrate the Professions of First and Final Vows.

Adding to the special and historic character of the celebration, the Profession Mass was held at Collège Notre-Dame du Perpétuel Secours in Cap-Haïtien, which is the very school to which the first Holy Cross missionaries arrived September 8. 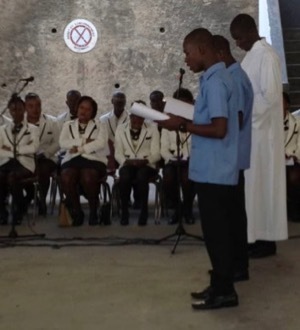 During the Mass, the community witnessed the First Professions of its two novices, Mr. Loudens Joseph, C.S.C., and Mr. Love-Stanley Préma, C.S.C. The novices were just completing their Novitiate year under the tutelage of Fr. Joseph Keith Louidor, C.S.C., Novice Master.

All of the Professions of Vows were received by Fr. Eric Jasmin, C.S.C., Superior of the Province.

In his homily, setting the historical context of the day, Fr. Jasmin explained the circumstances of the arrival of Holy Cross to Haiti and the choice of Cap-Haïtien as the beginning of this mission. He expressed his gratitude to the Lord for so many graces over those 75 years. He highlighted the contributions of the mission to the development of the city, as well as its contribution to the formation of so many generations of youngsters.

Fr. Jasmin also took the opportunity to thank the parents, and invited his young confreres to imitate the Marian virtues, to be men of prayer, and to trust in divine providence.

At the end of the Mass, Mr. Blaise, on behalf of all the professed, thanked the Congregation for the quality of the formation that they had received. He also thanked all the people who were present or united with them through prayer.

Specifically, he thanked Fr. Rodrigo Valenzuela, C.S.C., Assistant Superior of the District of Chile-Peru, who participated in the celebration. Mr. Blaise, Mr. Thomas, and Mr. Jean spent four years of their initial formation at the House of Formation in Santiago, Chile.

After the Mass, there was a delicious meal both to welcome the guests, parents, and friends of the professed and to continue the celebration of the joy of being together the Holy Cross family.

The celebrations for the Holy Cross community in Haiti have not ended. The four seminarians who professed Final Vows will be ordained deacons this Saturday, September 14, by the Most Rev. Launay Saturné, Archbishop of Cap-Haïtien. The Ordination Mass will be held at the Cathedral in Cap-Haïtien. 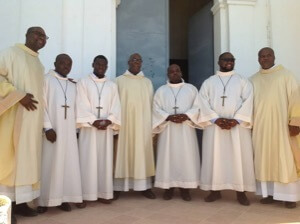 Following their Deaconate Ordinations, the four deacons will get right to work. Mr. Jean is working at Collège Saint Eugène de Mazenod in Fort-Liberté; Mr. Thomas is serving at Collège Père Pérard in Plaisance; Mr. Celifin is helping at École Joseph Le Pévédic and Collège Sainte-Croix in Limbé; and finally Mr. Blaise will work as the Executive Secretary of the Provincial at the Province’s headquarters in Port-au-Prince.