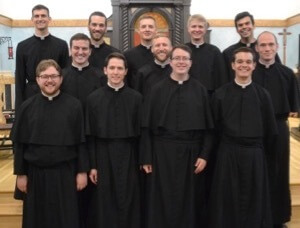 The Congregation of Holy Cross’s United States Province of Priests and Brothers had 12 reasons to celebrate on August 3, 2019, as a dozen novices made their First Profession of Religious Vows. The Mass of First Profession was held in Sacred Heart Parish in Colorado Springs, Colorado, which is the home to the Novitiate and run by the Province. Fr. William Lies, C.S.C., Superior of the United States Province, presided and received the novice’s Profession of Vows.

Another interesting dimension of this year’s class is that two of the men have brothers who are priests of the United States Province. Br. Matthew’s older brother Fr. Christopher Rehagen, C.S.C., professed First Vows on July 30, 2011, and was ordained on April 11, 2015. Mr. Michael’s older brother Fr. Brogan Ryan, C.S.C., professed First Vows on August 2, 2014, and was just ordained earlier this year on April 27. 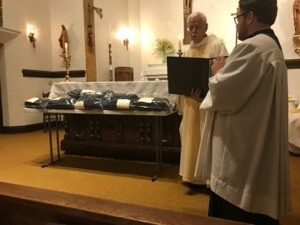 As is the custom at the Holy Cross Novitiate in Cascade, Colorado, the celebrations began on Friday night with Mass at Holy Rosary Chapel, one of two chapels that are part of Sacred Heart Parish. Fr. Ken Molinaro, C.S.C., the Novice Master, presided at the Mass, while Fr. Don Dilg, C.S.C., Assistant Novice Master, preached. Also present was Br. James Blaszak, C.S.C., the Procurator of the Novitiate. At this Mass, the novices’ habits were blessed in anticipation of there Profession the following morning.

Following the Mass, the novices’ friends and families, as well as the Holy Cross brothers and priests who came to share in the weekend, gathered at the Novitiate for a cookout. 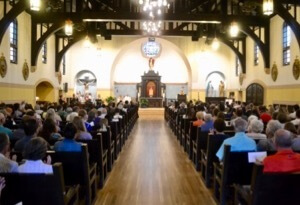 The First Profession Mass took place at 10 a.m. at Sacred Heart Parish. The church, which was recently renovated, was filled with over 350 people. In addition to the men’s families and Holy Cross religious, many people came from the parishes and ministry placements where the novices had served during the year. The presence of so many people made for both a festive and prayerful celebration.

In his homily, Fr. Molinaro offered specific words to the men’s families, thanking for them for how they have loved and formed them sons and brothers, helping them take this next step in their lives.

Fr. Molinaro, however, reserved his most meaningful words for the novices. Recapping their journey of growth through the Novitiate year, he encouraged them to the continue to be “refashioned by the Lord’s creating grace again and again.” 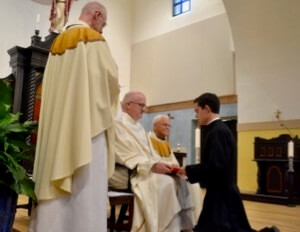 After their First Profession of Vows, the 12 newly professed then received and put on their habits as professed religious of the Congregation. They also received the cross and anchors, which serve as the symbol of profession in Holy Cross. The celebration of the Eucharist then continued with the offertory.

Following the Mass, there was a large reception in the Sacred Heart Parish Center with food that had been prepared by Br. Blaszak and other Holy Cross religious who served as his cooking assistants. As has become custom, Br. Blaszak's cream puffs were the biggest hit. 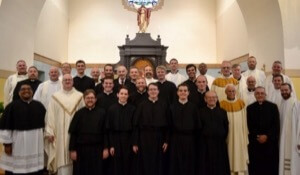 The newly professed then had Sunday to spend with their families and friends before taking off early Monday morning to make the journey back to Moreau Seminary in Notre Dame, Indiana, where all 12 will continue in their initial formation, including theological studies at the University of Notre Dame.

The Novitiate Staff had only a few days to rest as the new class of 10 novices arrives today, August 13. It is an international group, with two novices from the Vicariate of France, one is from the Midwest Province, and then the other seven from the United States Province.