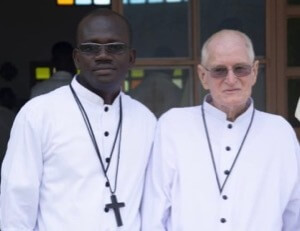 The members of the Congregation of Holy Cross’s District of West Africa gathered on Saturday, September 14, 2019, for the double celebration of the Sixtieth Anniversary of the Vows of Br. Vincent Gross, C.S.C., and the Final Profession of Vows by Br. Maxwell Kofi Aboagye Kyeremeh, C.S.C. The ceremony took place at the St. Brother André Chapel in the District’s Center in Brafoyaw.

On the eve of the celebration, the District members, Holy Cross sisters, and family members and friends of Br. Maxwell gathered in the chapel for a prayer service to kick of the weekend in prayer.

During the vigil, Br. Maxwell shared with the congregation his vocation story and expressed his deepest appreciation to all those who had formed part of his faith journey. There was a small reception to welcome all those who had arrived from long distances to join in the celebration on Saturday.

Saturday proved to be a beautiful, sunny day after the usual convectional rains of September brought a morning dew that turned into some early slight showers. Guests came from both near and far. In addition to the family of Br. Maxwell, as well as his and Br. Vincent’s friends, a number of local clergy and religious came to participate in the celebration. There was also a contingent that came from Br. Maxwell’s home parish of Saints Joachim and Anne, Teshie, near Accra. The choir for the occasion was made up of the choirs from Holy Family Church, Brafoyaw and St. Matthew Parish, Moree. 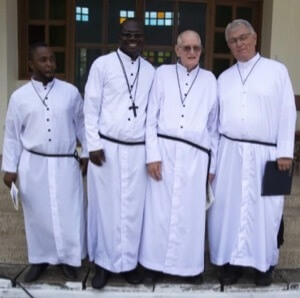 Before the Final Vow Ceremony, Br. John Badu Affum, C.S.C., Superior of the District, invited Br. Vincent to come to renew his commitment on the occasion of his 60th Anniversary of Religious Profession. Receiving the renewal of his commitment was Br. Kenneth Haders, C.S.C., Superior of the Midwest Province (of which the District of West Africa is a misson).

In his capacity as Provincial Superior, Br. Haders also received the Final Vows of Br. Maxwell and presented him the insignia of his Final Profession, including most importantly the St. Joseph Medal, which all finally professed Holy Cross Brothers wear.

The Most Rev. Charles Gabriel Palmer Buckle, Archbishop of Cape Coast, presided at the Mass. It was his third celebration of Final Professions of Religious Vows in the previous three weeks. 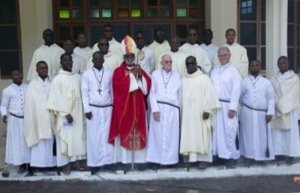 In his remarks, the archbishop celebrated both the new commitment of Br. Maxwell and the long-held commitment of Br. Vincent, acknowledging in particular that he has spent a significant part of his life serving in West Africa, especially in Ghana, both in Sekondi-Takoradi and Cape Coast.

The celebration concluded with a joyous reception and refreshments on the ground of the District Center. It was a chance for all gathered to give thanks to both men but also to God for all his many blessings.