On July 25, 2013, in Fort Portal, Uganda, nine young men made their profession of vows in the Congregation of Holy Cross. Rev. Thomas J. O'Hara, C.S.C., Superior of the United States Province, presided at the Mass, which was held at the Holy Cross Novitiate at Lake Saaka. All nine newly professed are members of the Congregation's District of East Africa, which ministers in Kenya, Uganda, and Tanzania.

Eight of the men who professed vows were novices who had completed their year of formation at the novitiate and were professing their First Vows. They were joined by Mr. Mayanja Peter, C.S.C., who professed vows as part of his re-admittance into the Congregation after having left previously while in temproary vows. 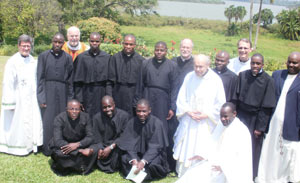 Three of the newly professed are in formation to be religious brothers in the Congregation: Br. Mugume Adolf, C.S.C., Br. Omukuyia Bernard, C.S.C., and Br. Tumusiime Patrick, C.S.C. Their vows were received by Br. William Zaydak, C.S.C., Superior of the Moreau Province.

In his homily, Fr. O’Hara urged the men professing vows to “put on the armor of Christ” so as to live faithfully the counter-cultural way of life to which they have been called. He gave thanks for all who have played the role of “Eli” in their lives, helping the young men to listen to the call within and to go “one step further” in generously responding to that call.

“Because God loves you, you are empowered to love and serve your brothers and sisters in a profound way,” said Fr. O'Hara. “Rejoice in that love, and in this special day.”

Read the vocation stories of Holy Cross brothers and priests

Br. Zaydak gave a moving talk to the newly professed after communion, encouraging them to walk in the footsteps of the great Holy Cross “band of men” which preceded them. He pointed especially to Servant of God Vincent McCauley and St. André Bessette as examples of commitment to the Church and of prayerful, humble, healing service.

This was the final novitiate class of Br. Joseph Kaganda, C.S.C., who is completing six years as Novice Master in Fort Portal. Rev. Ronnie Kawooya, C.S.C., and Rev. Dick Stout, C.S.C. were his most recent assistants.

Ten new novices are ready to take the place of the newly professed at the novitiate at Lake Saaka. These 10 men were formally received into their novitiate year on Saturday, July 20, in a Mass held at St. Paul's National Major Seminary in Fort Portal, Uganda. Rev. Tom Smith, C.S.C., the new Novice Master, presided at the Mass. He was joined by Rev. Vincent Mbusa, C.S.C., and Fr. Stout who will serve on the staff of the novitiate. 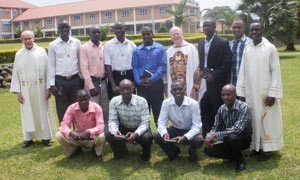 The new novices and staff were at the major seminary for a three-day silent retreat, led by Sr. Romina Nyemera, while the eight men who just professed their First Vows were completing their year at the novitiate property at Lake Saaka. Sr. Nyemera belongs to the Sisters of Our Lady of Good Counsel, which is headquartered in Mbarara, Uganda.

"I enter this ministry with some nervousness, but trusting in the guidance of God's Spirit and the prayers of our Holy Cross saints," said Fr. Smith. "As an 'elder' here, I'm encouraged by the enthusiasm and seriousness of the novices with whom I'll be living and praying, while seeking to offer a meaningful apprenticeship in our Holy Cross life and assist their discernment."

Next week, on Saturday, August 3, at Sacred Heart Parish in Colorado Springs, Colorado, the Congregation will celebrate the First Professions of its novices in the United States.