After the Final Professions in the United States, Haiti, and Ghana in the last few weeks, India’s turn came in the second half of the month of September. Spread over two beautiful celebrations, the Congregation of Holy Cross in India celebrated the Final Professions of 11 religious in 2019. 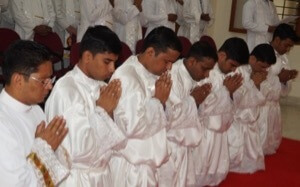 The Most Rev. Percival Fernandez, Auxiliary Bishop Emeritus of the Archdiocese of Bombay, presided at the Mass, and Fr. Robert Epping, C.S.C., Superior General of the Congregation, preached and received the vows of the seven men.

View an international gallery of Final Vows in Holy Cross 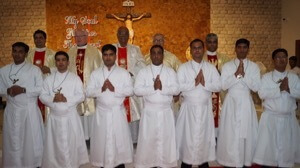 Among the many Holy Cross religious present for their professions were the superiors of their respective provinces: Fr. Roque D’Costa, C.S.C., of South India, and Fr. Simon Fernandez, C.S.C., of North East India.

Just one day later, on September 17, all seven of the newly finally professed were ordained to the Deaconate in the same chapel. Bishop Fernandez was the ordaining bishop. 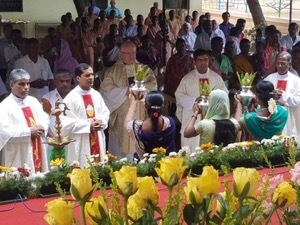 These seven Final Professions were only the start for Holy Cross in India, as a few days later, on September 22, four more religious professed Final Vows in the Congregation. These four religious are all members of the Vicariate of Tamil Nadu, and their Mass of Final Profession was held on the grounds of Holy Cross School in Somarasampettai. 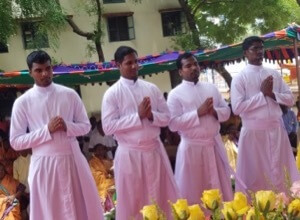 All four of the newly finally professed are members of the Society of Priests in the Congregation. Having made their Final Profession, the next step for them was to be ordained transitional deacons in anticipation, God willing, of their Ordination to the Priesthood.

Their Ordination to the Deaconate was today, September 29, at Pillar House in the chapel of the Pallotine Fathers in Maudurai. The Most Rev. Arochiasamy Jude Gerald Paulraj, Bishop Emeritus of the Diocese of Palayamkottai, was the ordaining bishop. As with the previous celebrations, there was a large contigent of Holy Cross religious present, along with the family and friends of the four men. Following the Mass, there was a reception for those present. 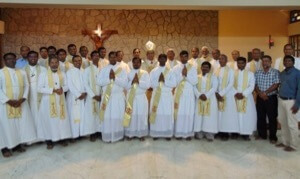 All told, that makes 21 Final Professions for the Congregation worldwide in the span of a month: five in the United States, four in Haiti, one in Ghana, and the 11 just mentioned in India. It is a powerful, international sign of the vitality of Holy Cross.