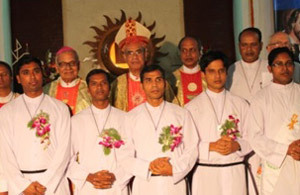 On  November 1, 2013, four brothers of the St. Joseph Province in Dhaka, Bangladesh, made their Profession of Final Vows in the Congregation of Holy Cross. The Mass of Final Profession took place at St. Christiana Church.

Explore the history and work of Holy Cross in Bangladesh

The church was filled to overflowing with relatives of the brothers, guests, seminarians, candidates from the formation houses, religious men and women, and priests. About 50 Holy Cross brothers, some Holy Cross Sisters and sisters from different congregations, ten priests, the parents of the men professing Final Vows, and two bishops joined the procession from the campus of St. Joseph Higher Secondary School to St. Christina Church prior to the Mass. 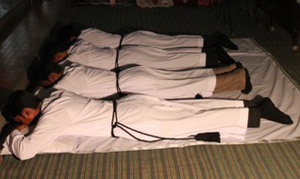 Archbishop D’Rozario in his opening remarks and during his homily spoke about the sacrifice being made by the four brothers professing Final Vows, as well as their family made, as worthwhile and one that would be rewarded.

The archbishop pointed out that on the day of their Final Profession, the Church was also celebrating the Feast of All Saints. He reminded all present, not just the four brothers, that they were called to be saints.

At the end of the Mass, Br. Harold Bijoy Rodrigues, C.S.C., Superior of the St. Joseph Province, offered words of gratitude to the bishops, priests, religious, relatives and the People of God present in the church. 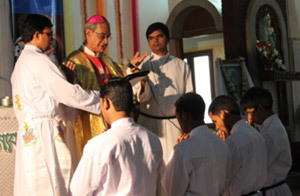 The day before the Final Professions, a “Mongol Ashirbad,” which is a purifying and blessing ceremony, was led for the men preparing to profess Final Vows by Br. Jerome Liton Rozario, C.S.C., the Director of the Aspirancy for the St. Joseph Province. Br. Rodrigues delivered the opening speech, and Fr. Sagor Louis Rozario, OMI, said the opening prayer. All who were present for this ceremony took part in the ritual and blessed the candidates. After the program all the relatives, guests and candidates from different formation houses shared a festive meal with the brothers.