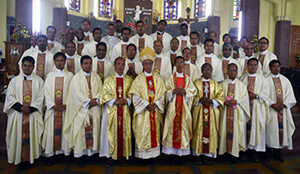 During April and May, the Congregation of Holy Cross in India celebrated its annual season of priestly ordinations. The four Ordinations over those two months brought the total for 2018 to five new priests for Holy Cross in India. That includes the previous Ordination on January 27, 2018, of Fr. Ignaci Santiago, C.S.C., of the Vicariate of Tamil Nadu.

All five of the new priests had previously professed Final Vows together and been ordained deacons on October 5-6, 2017, in the chapel of Holy Cross Seminary in Pune, India.

After Fr. Ignaci’s Ordination, the next to be ordained was Fr. Bilingshar Syienlieh, C.S.C., of the North East Province. His Ordination took place on Easter Saturday, April 7, which was the same day that three new priests were ordained for the United States Province of Priests and Brothers. 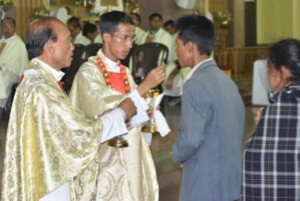 Fr. Bilingshar’s Ordination took place at the Mary Help of Christians Cathedral Church in Shillong, Meghalaya. The Most Rev. Dominic Jala, Archbishop of the Archdiocese of Shillong, presided at the Ordination Mass, which was attended by hundreds of lay faithful in addition to enthusiastic members of Fr. Bilingshar’s family. Many of his brother priests in Holy Cross were present, as well as many other religious men and women.

Following the Mass, there was a reception and program to congratulate the new priest, yet the celebrations did not end there. The following day, Divine Mercy Sunday, April 8, Fr. Bilingshar celebrated his First Mass at Christ the King Church in his native village of Wahsohlait, which is in the Wahlang Parish of the Shillong Archdiocese.

A large crowd of over 700 came to the Mass, and afterward they stayed for an hour-long cultural program in which even senior women from the parish were actively involved. No one went away with an empty stomach, as everyone shared the joy of the Ordination with a meal in the house of the newly ordained. 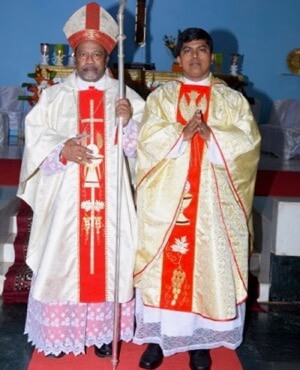 The next to be ordained was Fr. Santhosh Fernandes, C.S.C., who is a member of the Province of South India. He was ordained on April 19 by the Most Rev. Peter Machado, D.D., who at the time was the Bishop of the Diocese of Belguam. He has since been installed as the Archbishop of the Archdiocese of Bangalore.

Fr. Stanhosh’s Ordination took place at his home parish of St. Anne’s Chruch in Alnavar, Kartnataka. Present for the Mass were many of his friends and family, as well as a large contingent of Holy Cross priests and brothers. They remained afterward to continue to celebrate joyfully with the newly ordained on this grand day for the Church and Holy Cross.

Fr. Stanhosh returned to his home parish of St. Anne’s the following day, April 20, to celebrate his first Mass of Thanksgiving.

The last two to be ordained in the class were Fr. James Peter Selvaraj, C.S.C., and Fr. Arun Richard Roy, C.S.C., both of whom are members of the Vicariate of Tamil Nadu. With the previous Ordination of Fr. Ignaci in January, that meant that three of the Ordinations in India this year were for the Vicariate. 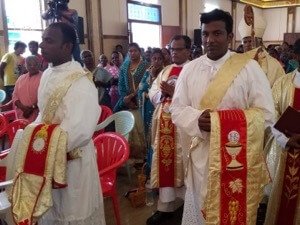 “All these ventures in different directions will hopefully enhance the prospects of vocations to Holy Cross in the years to come,” said Fr. Justin. 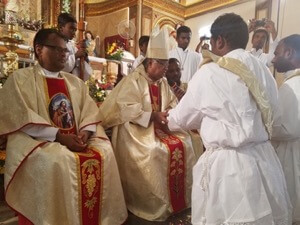 Fathers Arun and James were ordained on May 12 by the Most Rev. Thomas Paulsamy, D.D., the Bishop of of the Diocese of Dindigul, which is in the southern part of the civil state of Tamil Nadu.

It was the first Ordination ceremony ever to be held in the Ariyanellure Parish Church since its founding in 2011 when it was handed over as a new parish to Holy Cross.

Hundreds of people from Ariyanellure, the home parish of Fr. Arun, and from Kosavapatty, the home parish of Fr. James, as well as many people from the parishes where the two had exercised their diaconate ministries came to attend the Ordinations. Along with the newly ordained's family and Holy Cross confreres, they wholeheartedly and prayerfully joined in the weekend's celebrations and events. 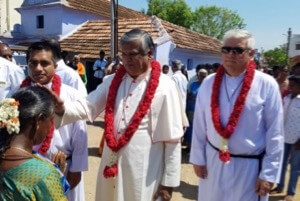 Among the Holy Cross religious present for the Mass and festivities were Br. Paul Bednarczyk, C.S.C., the Vicar General and the First General Assistant of the Congregation, and Br. James Ripon Gomes, C.S.C., the Third General Assistant. They greeted at the bishop at the the entrance of the village and processed through the streets to the church with an escort of drums and strewn flower pedals.

The following day, May 13, both of the newly ordained priests, Fr. Arun and Fr. James, had their first Masses of Thanksgiving in their respective parishes. Many of their Holy Cross confreres joined them to pray and celebrate with them in their first Masses.

Special thanks to Fr. Justin Diraviyam, C.S.C., and Fr. Mariaraj, C.S.C., for contributing to this article.