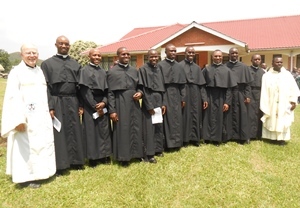 On July 16, 2014, the Congregation of Holy Cross celebrated the First Profession of nine novices at the Holy Cross Novitiate in Fort Portal, Uganda. Their vows were received by Fr. Pat Neary, C.S.C., the Superior of the District of East Africa. Five days later, on July 21, the Novitiate, which is located on picturesque Lake Saaka at the foot of the Rwenzori Mountains, was filled again as new new novices were formally received into the Novitiate by Fr. Tom Smith, C.S.C., the Novice Master at Lake Saaka.

In his homily at the Mass of First Profession on July 16, Fr. Pat spoke of the newly professed as men who have fallen in love with God and who now ask the grace to remain in that love. “These vows are about trying to love as Christ did: as a chaste, poor, obedient man” he said. “They are meant to transform us into Christ, into pure love.”

Fr. Neary urged the newly professed to be lovers of God’s people, lovers of one another, lovers of the Cross, and lovers of the Eucharist. “Let your whole life in Holy Cross,” he concluded, “be your love letter to God!”

Read about other First Professions in Holy Cross

The Mass of First Profession was the first Mass celebrated in the large, new chapel at the novitiate. The chapel is still in need of finishing touches and sanctuary furniture, but was decorated with flowers and served well for the 150 or so guests that were present. The guests included the spiritual directors and pastoral supervisors who had assisted the newly professed during their novitiate year, along with the novitiate employees and some representatives of the local parish chapels where the newly professed led communion services each Sunday.

A celebratory lunch for all was held on the beautiful grounds of the novitiate. The nine newly professed, along with their staff, planted a tree in gratitude for the year's graces. Then, in the evening, a party was held for all the Holy Cross religious present and the Congregation's lay volunteers. It featured roasted goat and chicken, as well as much joyful dancing. 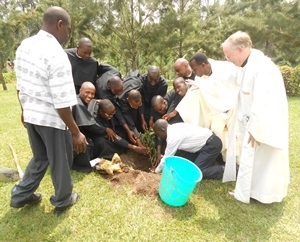 Fr. Smith summed up the day:  “It has certainly been a day of hope and joy for Holy Cross in East Africa. These young brothers of ours have shown real seriousness in prayerful listening to God and in all the other opportunities for learning about religious life and Holy Cross that have been present in this novitiate. In particular, each has demonstrated a heart and zeal for ministry. I thank God for leading them to commitment with us."

The nine newly professed Holy Cross religious are all also candidates for Ordiation to the Priesthood. Six of them are from Uganda, while two are from Tanzania and one from Kenya. They are: Mr. Augustine Bahemuka, C.S.C., Mr. Bizaaba Francis, C.S.C., Mr. Lulu Gabriel Simon, C.S.C., Mr. Godfrey Henry Massawe, C.S.C., Mr. Wandua Mburu Stephen, C.S.C., Mr. Mulema Andrew, C.S.C., Mr. Mumbere Julius, C.S.C., Mr. Salongo Stephen, C.S.C., and Mr. Walugembe Ponsiano, C.S.C. After a brief time visiting family, all will proceed to McCauley Formation House in Nairobi to continue their formation and to study theology at Tangaza College.

In addition to Fr. Smith, the Novitiate Staff this past year included Fr. Dick Stout, C.S.C., who was on home leave at the time of the First Profession, and Fr. Vicent Mbusa, C.S.C., who will be working this coming year at St. Joseph Oratory in Montreal, Canada.

Read the Constitutions of the Congregation

After sitting empty for five days, nine new novices were received into the Novitiate on July 21 in a liturgy presided and preached by Fr. Smith. Like the previous class of novices, they come from the three countries that Holy Cross serves in East Afria: Uganda, Kenya, and Tanzania. For the previous month, since June 21, the novices-to-be had been at the Congregation's parish in Kyarusozi, doing language studies to learn Rutooro. Immediately following their reception into the Novitiate, they went on a three-day silent retreat directed by the Provincial of the Sacred Heart Sisters in East Africa, Hilda Bamwine, rscj.