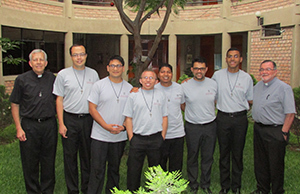 Two weeks ago, on January 7, the Feast of St. André Bessette, the Congregation of Holy Cross celebrated the First Professions of six novices from Latin America. Hailing from Brazil, Chile, and Mexico, the six young men had just completed their year of formation at the Holy Cross Novitiate in Huaycán, Peru, under the direction of Fr. Donald Fetters, C.S.C., the Novice Master.

The Mass of First Profession was held in San Francisco de Asís Chapel, which is one of the 19 churches and chapels that make up Lord of Hope Parish in Canto Grande, Peru. Holy Cross since 1982 has overseen the large parish, which is the focal point of the Congregation's presence and mission in Peru.

The chapel was packed for Mass. Many of the people who attended were those with whom the novices had served in their weekly apostolate at Yancana Huasy (a center for special needs children and their families) and during their month-long apostolic experience at either the Fe y Alegría School in the parish, the Rosary Apostolate, or the parish’s health ministry program. Holy Cross religious from the Congregation’s District of Peru were there in full force as well as the Sisters of Holy Cross who have their novitiate in Canto Grande.

Read news of First Professions from around the world 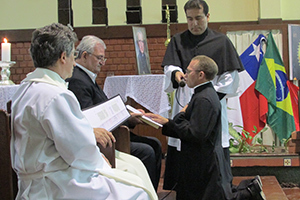 Fr. Aníbal Niño Loarte, C.S.C., the Superior of the District of Peru, presided at the Mass, which used the readings from the Feast of St. André. Fr. Fetters focused his homily on the fact that each of the six who was professing vows had chosen to give his life as Brother André did, as a response to the urging of Peter to place at the service of others each and every gift they had been given.

Fr. Rick Wilkinson, C.S.C., the Vicar of the United States Province, received the vows of Mr. Ángel Lázaro de la Cruz, C.S.C., who is from Mexico, and Mr. Gabriel Fuentes Velasco, C.S.C., who comes from Chile. 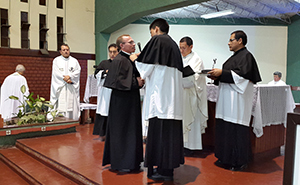 After professing the vows of poverty, chastity, and obedience for the first time, the six newly professed received the cord and cape, which, along with the black cassock, constitute the Holy Cross habit. They were assisted in tying the cord for the first time by Mr. David Olarte Carrasco, C.S.C., who served the Mass of First Profession along with his classmates, Mr. Elmer Caro, C.S.C., and Mr. Julio Arias, C.S.C. The three of them will be making their Final Profession of Vows in the Congregation at the end of January.

At the conclusion of the Mass, Mr. Inácio Pereira, C.S.C., in the name of all the newly professed, offered a heartfelt expression of gratitude to the many people who had been involved in their formation and had been for them significant guides on the road to following their call. A reception then followed in the local parish hall.

This first profession class is a great witness of the multicultural dimension of the Congregation’s presence and work, especially in Latin America.

“Shortly after his election Pope Francis commented that the electors had to go to the end of the world to find a new Pope. Lima, Peru is not exactly the end of the world, but it’s getting there, and it’s part of that world which the Pope called home before he was elected,” said Fr. Fetters. “We don’t have any mission in Argentina, but we do in Brazil, Chile, Mexico and Peru, and we serve a very large Hispanic population in the United States with roots in some of those places. For more than half a century Holy Cross has prepared people to serve the Church in this part of the world and beyond, in international formation settings.” 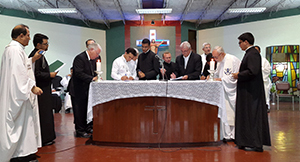 The First Profession of these six men, then, is a great gift not just for Holy Cross in the region, but in the wider world.

“At moments like this we are all filled with emotion and proud to be Holy Cross; and we are very happy with the assurance that the Lord continues to call fine young men to serve his Church and the world though the life and work of our community,” said Fr. Aníbal.

Special thanks to Fr. Donald Fetters, C.S.C., for contributing to this story.