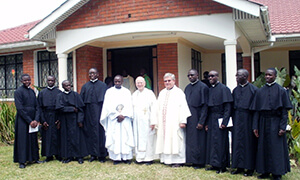 This year, of the eight men who professed First Vows, one of them, Vincent Siryako, C.S.C., is a brother. The other seven are studying for the priesthood. They are: Kavishe Filbert, C.S.C., Robert Rujumba, C.S.C., Charles Lwanga, C.S.C., Baltazari Ponsiano, C.S.C., Cavine Odiwuor, C.S.C., Clement Igumira, C.S.C., and Gideon Muriithi, C.S.C.

The Congregation’s mission in East Africa spans three countries—Uganda, Kenya, and Tanzania—and all three countries are represented in this profession class: four from Uganda, two from Kenya, and two are from Tanzania.

The vows of the eight men were received by Fr. Bernard Amani, C.S.C., the Steward of the District of East Africa. Fr. Amani also presided and preached at the Mass.

Among those present were Fr. Tom Smith, C.S.C., the Novice Master; Fr. Francis Mukasa, C.S.C., the Assistant Novice Master; and Fr. George Lucas, C.S.C., who asisted for a few months at the Novitiate this past year. They were part of a larger contingent of Holy Cross priests, brothers, and sisters from near and far who surrounded the newly professed with prayer and blessings, welcoming them into their new family.

Fr. Amani began his homily with a story of how many think the novitiate is a “year of rest.”  “They are very wrong!” he said. The Novitiate, he continued, is a time for the most serious work of fostering a strong relationship with Jesus and discerning the call of Jesus in one’s life. He reflected on St. Augustine’s famous prayer—“Late have I loved you … You called and cried out and shattered my deafness …”—as capturing the gifts of the Novitiate year in the lives of those to be professed.

Fr. Amani went on to speak of the profession of religious vows as “an act of faith, maintained by hope, and motivated by love – love of God and love of God’s people, “even those who are difficult to love.” 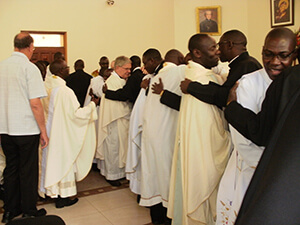 Fr. Amani asked all present in the overflowing Novitiate chapel to support, encourage, and pray for the newly professed who undertake the journey of religious life and service not as saints but as flawed human beings open to God’s call and confident that God’s grace will continue to guide their growth in holiness. The over 150 guests at the First Profession Mass included the spiritual directors and pastoral supervisors who had assisted the newly professed during their Novitiate year, the Novitiate employees, some representatives of the local chapels where the men led communion services each Sunday, along with special friends and neighbors.

According to Fr. Smith, this class of novices has worked hard to create a “prayer walk” in the midst of the small forest on the Novitiate property, which on beautiful Lake Saaka at the foot of the Rwenzori Mountains, and the images of the Stations of the Cross have now been “planted” along the walk. A small grotto has also been built at a shady spot along the walk, still to be completed with a statue of Our Lady of Sorrows.

“We trust this work will benefit many classes to come,” commented Fr. Smith. “Also, one of the newly professed, Ponsiano Baltazari, has completed a Kiswahili translation of our Holy Cross Constitutions during this year—a gift to future classes as well.”

The celebratory lunch for all was held on the beautiful grounds of the Novitiate. Celebrations continued into the evening with roasted goat and chicken, and joyful conversation.

“We give gratitude to God for the gift of eight men who made their first vows on July 16 in the Congregation of Holy Cross in the District of East Africa," said Fr. Mukasa. "For us, it was celebrating fruits of discernment and at the same time being replenished with grace – and the two entrance songs we sung together in the liturgy – Bwana umeniita nikufuate (Lord you have called me to follow you) and Obw’ohurra iraka lya Mukama … otabandaara (When you hear the voice of the Lord do not hesitate to respond) were enriching responses that aptly ushered us into the core of our celebration – God’s call and love. May the Lord bless our eight brothers as they continue their formation journey.”

After a brief time visiting family, all the newly professed will proceed to McCauley Formation House in Nairobi, Kenya, to continue their initial formation. The seminarians will study theology at Tangaza College, which Holy Cross and five other religious communities founded almost 30 years ago and which has grown into the largest institution for training church ministers and priests in Africa. Br. Siryako will enroll for a post-graduate diploma in education at the Catholic University of East Africa which Servant of God Vincent McCauley was instrumental in founding. 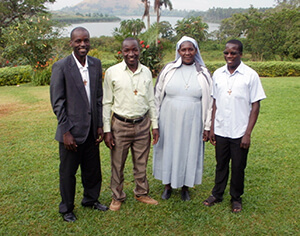 As one class of novices left the Novitiate, another was quick on its heels, as less than a week later, on 21 July 2016, three new novices were formally received into the Novitiate. All three are from Uganda and are members of the Society of Priests.

Fr. Smith presided and preached at their acceptance into the Novitiate. He reflected on Samuel’s words—“Speak, Lord, your servant is listening”—and Jesus’ question to his first disciples—“What do you seek?”—as suggestive of the central novitiate tasks of listening to God in honest discernment and coming to know one’s deepest desire. 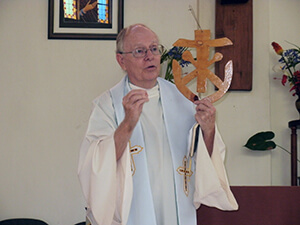 Fr. Smith and Fr. Mukasa blessed and presented each new novice with a “Chilean Cross” and a copy of the Constitutions of the Congregation of Holy Cross and Directory of Devotional Prayer. The new novices have just completed a three-day orientation retreat directed by Sister Gertrude, DST.

Thanks to Fr. Tom Smith, C.S.C., for helping prepare this report.