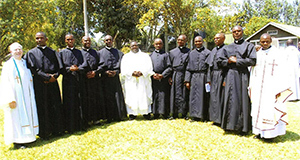 Just over a week ago, on Thursday, July 16, the Holy Cross Novitiate, Saaka, in Fort Portal, Uganda, celebrated the First Professions of nine novices. All nine of the newly professed are members of the Congregation of Holy Cross’ District of East Africa. In their countries of origin, the nine are evenly divided among the three countries served by the district: Uganda, Kenya, and Tanzania.

The date of the First Professions had great significance for the District of East Africa, which is headquartered in Kampala, Uganda. It was the anniversary of the unification of the Holy Cross brothers and priests into one common district in the region.

One of the nine, Br. Bwambale Barnabas, C.S.C., is a member of the brothers’ society.

Read the Constitutions of the Congregation 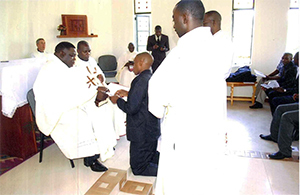 The First Vows of the newly professed were received by Fr. Bernard Amani, C.S.C., District Steward, who also presided and preached at the Mass. Among those joining him in the liturgy were Fr. Tom Smith, C.S.C., Novice Master, and Fr. Francis Mukasa, C.S.C., Assistant Novice Master. Unable to attend was Fr. Dick Stout, C.S.C., who had served as a member of the staff for this Novitiate class but had to return to the United States due to weakening health. His presence was sorely missed by all, but especially by the newly professed.

In his homily, Fr. Amani reflected on the Gospel reading chosen by the novices: the parable of the vine and branches (John 15). He spoke of the novitiate year as a time of pruning, a pruning of the heart, mind, and intentions “so you may conform to the life of the one who speaks to you – Christ himself.”

Fr. Amani expressed confidence that those to be professed had been prepared well and were ready “to be branches, remaining in the one who called [them] to Holy Cross.” He asked all present to support, encourage, and pray for the newly professed who undertake the journey of religious life and service, not as saints but as human beings open to God’s call and confident that God’s grace will continue to guide their growth in holiness.

Following the Profession of Vows, the newly professed sang together a special Song of Dedication, which they had written to ask the help of St. André Bessette as they seek to live their vows faithfully. This class has developed a special devotion to St. André. One of them even used existing materials to compose a brief life of the first Holy Cross saint in the Kiswahili language.

The recently renovated chapel at the novitiate was filled to overflowing with over 150 guests. The guests included the spiritual directors and pastoral supervisors who had assisted the newly professed during their novitiate year, the novitiate employees, some representatives of the local parish chapels where the newly professed led communion services each Sunday, and many special friends and neighbors.

Holy Cross priests, brothers, and sisters from near and far surrounded the newly professed with prayer and blessings, welcoming them into their new family. Their number included three seminarians in temporary vows from Moreau Seminary in the United States. They have spent their summer visiting the district and entering into the ministry of Holy Cross in Bugembe, Jinja, Uganda.

The celebratory lunch for all was held on the beautiful grounds of the Novitiate, located on Lake Saaka at the foot of the Rwenzori Mountains. Celebrations continued into the evening with roasted goat and chicken, and, of course, dancing.

Read the vocation stories of men in Holy Cross

After a brief time visiting family, all will proceed to McCauley Formation House in Nairobi to continue their formation. The seminarians will study theology at Tangaza College, which Holy Cross and five other religious communities founded almost 30 years ago and which has grown into the largest institution for training church ministers and priests in Africa. Br. Bwambale will enroll for an education degree at the Catholic University of East Africa, which Servant of God Vincent McCauley was instrumental in founding.

The Novitate at Lake Saaka sat vacant for less than a week, as on July 22, 2015, ten new novices were formally received into the Novitiate: two from Tanzania, two from Kenya, and six from Uganda. All of them are members of the priests’ society. 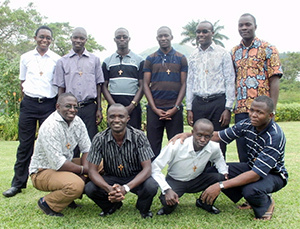 Fr. Smith presided and preached at their reception into the Novitiate. He reflected on Samuel’s words, “Speak, Lord, your servant is listening,” and Jesus’s question to his first disciples, “What do you seek?” He characterized these words as suggestive of the central novitiate tasks of listening to God in honest discernment and coming to know one’s deepest desire. Fr. Smith and Fr. Mukasa blessed and presented each new novice with a “Chilean Cross” and a copy of the Constitutions of the Congregation of Holy Cross and the Congregation’s Directory of Devotional Prayer. The new novices then went on a three-day, silent retreat directed by Fr. John Fortunate, OFMCap.