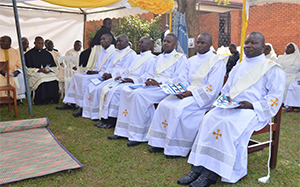 "If I had to choose a word to describe this ordination class, the word would be ‘energetic,'" said Fr. Patrick Neary, C.S.C., the Superior of the District of East Africa. "They possess that interior spirit of zeal that was so important to our founder, Blessed Basile Moreau. They are a happy, outgoing, and pastorally oriented group of men. Young and old respond equally well to them. While in formation each served in a ministry placement in one of the slums of Nairobi, which explains their particular sensitivity to the poor and disenfranchised. They are certainly 'men with hope to bring!'" 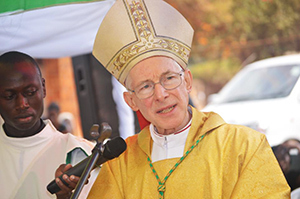 In his homily, Archbishop Blume drew from the second reading of the Mass, which came from the Letter to the Hebrews, to speak about how priests in the Old Testament could deal gently with the ignorant and the wayward because they themselves were “beset with weakness.” Christ himself knew how to reach out to the harassed and the helpless and so must the priest of today. He went on to explain how Christ sacrificed his own life for the people and that a priest’s daily life must be a similar willing sacrifice. Archbishop Blume then tied the image of sacrifice and self-offering to the Eucharist.

“Dear Ordinands: Every time you receive the oblation of God’s people, symbolized in the bread and wine presented at Mass, 'understand what you do, imitate what you celebrate, and conform your life to the mystery of the Lord’s cross.' You are the oblation of Christ. You will say: 'This is my body… my blood.' Can you imagine that as priests we dare to speak like that? Using the word 'my' means you and Christ are inseparable together in the liturgy and in its prolongation in our Christian lives. Your body and His body, your blood and His blood," said the Apostolic Nuncio. 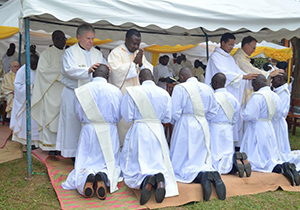 Archbishop Blume then talked about the priesthood as a gift to the Church and to the six men about to be ordained, but a gift that is “not for privilege but for service.” He also said, “Divine gifts are meant to be shared, not kept under a bushel basket.” He further added that ordination is a time for a renewal in mission.

Archbishop Blume concluded his homily by focusing on the centrality of prayer in the life of a priest, quoting from the Constitutions of the Congregation of Holy Cross on how “we find prayer no less a struggle than did the first disciples, who wearied of their watch. . . . But without prayer we drift, and our work is no longer for Him” (3:25). As the Apostolic Nuncio put it, “So, dear ordinands, be faithful to the Lord in prayer as he is faithful to you.”

See a Gallery of Ordinations from Around the World 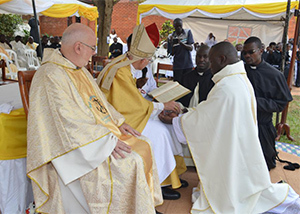 Also present at the Ordination Mass was Fr. Thomas J. O'Hara, C.S.C., the Superior of the United States Province. In his remarks at the end of the Mass, Fr. O'Hara told the recently ordained: "I pray that on this sacred day you may listen to the words of our Holy Father Francis who challenges all priests to bring the healing power of God’s prayer to everyone in need, to stay close to the poor and the suffering, and to never be afraid to be a shepherd willing to live and serve the sheep in their own situations. Never be afraid to venture out from the comfort of parish structure and parish houses in order to meet the people of God."

Following the Ordination Mass, nearly 2,000 people attended the festive lunch at which there was the cutting of the cake and the giving of gifts to the newly ordained by their families and friends. The celebration included music and dancing that lasted well into the night.

Although the Congregation first arrived in Uganda in 1958, it only began accepting vocations from the region in the 1980's after having first built up the local Church. The steady stream of vocations the Congregation has been blessed with over the last three decades has allowed Holy Cross to expand its mission in the region.

"We are in a period of expansion and are looking to take on new parishes and begin new educational and pastoral initiatives," said Fr. Neary. "Now we increasingly have the workhorses that will allow us to move the work of Holy Cross forward in East Africa. With each new class of men professing Final Vows or getting ordained, there is a new wave of energy and enthusiasm that is infectious. This class is no exception." 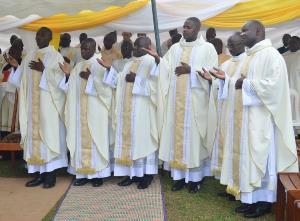