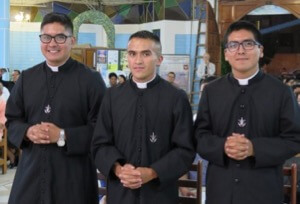 On January 6, 2018, the Congregation of Holy Cross in Latin America celebrated the first professions of one religious brother and two religious seminarians in Canto Grande, Perú.

“The first profession celebration of Br. Antony, Luis and Pedro was an occasion of gratitude,” said Fr. Fr. Thomas Zurcher, C.S.C., Superior of the Congregation’s mission in Mexico, “gratitude for the CSC community in Peru who accompanied these three novices; gratitude for the wholehearted response of these smiling young men to their call from the Lord; gratitude for God’s presence among us a men with hope to bring.” 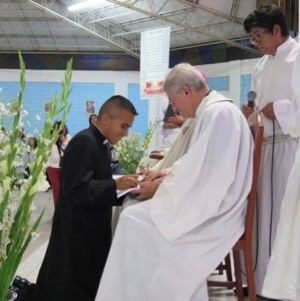 Br. Anthony, Luis, and Pedro made their Novitiate in Huaycán, Peru, under the tutelage of Fr. John Phalen, C.S.C., Novice Master, and Br. John Tryon, C.S.C., Assistant Novice Master. Also living in residence at the Holy Cross Novitiate during the year was the Most Rev. Arthur J. Colgan, C.S.C., Auxiliary Bishop of the Diocese of Chosica.

While all of the Novitiate year is, in essence, a formation for the profession of Religious Vows in the Congregation, the three novices made a special retreat in December as part of their final preparations. That retreat was led by Fr. John Herman, C.S.C., Rector of Moreau Seminary in Notre Dame, Indiana, in the United States.

The Mass of First Profession was held at the Chapel of the Inmaculada Concepción, which is one of the 19 chapels that constitutes El Señor de la Esperanza Parish in Canto Grande. Many sisters, brothers and priests of Holy Cross, as well as many of the lay faithful who met or worked with the three men during their Novitiate, attended the Mass. 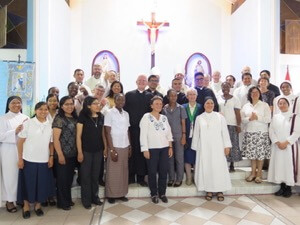 Bishop Colgan presided, and he was accompanied by the Most Rev. Jorge Izaguirre, C.S.C., Bishop Prelate of the Territorial Prelature of Chuquibamba. The homily was shared by Fr. Phalen and Br. Tryon.

Following the Mass, there was a festive reception to give thanks and honor the three newly professed.

“The three novices have a beautiful history of encounter with the Lord and with Holy Cross,” said Fr. Ahumada. “Each one, from different countries and different realities, arrived to the Congregation by listening to this call to take one further step in their following of Christ. The three have great apostolic zeal, great devotion to the Virgin, and the desire to work in a Church that shares with lay men and women the work of evangelization. 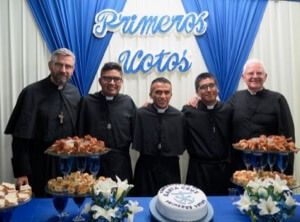 “The three have received their First Vows just days before Pope Francis will visit Chile and Peru, and less than a year after the Pope visited Mexico and Colombia,” continued Fr. Ahumada. “No doubt, their mission will be marked by the seal that Pope Francis has given the Church in these years—a Church of mercy, that welcomes and does not exclude, and that wants to transmit the joy of Jesus Christ.”

The three newly professed are now in their home countries visiting their families before going to the Congregation’s House of Formation in Santiago, Chile, where they will continue their initial formation in Holy Cross with other temporarily professed men from Brazil, Chile, Haiti, and Peru.