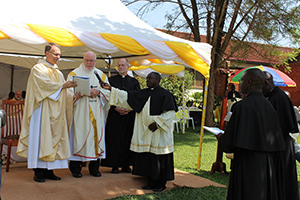 Saturday, January 3, was a day of celebration for the Congregation of Holy Cross in East Africa as two of its men, Arnold Jawiambe, C.S.C., and Linus Nviiri, C.S.C., made their Final Profession of Religious Vows. The Mass took place outside of St. Augustine's Institute in Kampala, Uganda.

Fr. Thomas J. O'Hara, C.S.C., Superior of the United States Province, which oversees the Congregation's District of East Africa (Kampala, Uganda), presided and preached at the Mass. He also received the two men's vows according to the Constitutions of the Congregation of Holy Cross.

Read about the vows in the Congregation's Constitutions 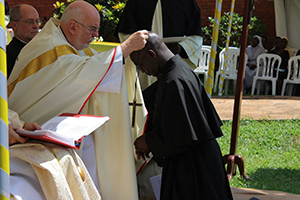 Before the Mass began, Fr. James Burasa, C.S.C., the previous superior of the District of East Africa, carried out the long-standing tradition in the District of reciting at Final Vows a litany of Holy Cross ancestors who have lived, worked and died in East Africa. This local tradition highlights the great respect and reverence for ancestors in African culture.

The choir for the Mass was formed by candidates from the Andre Formation House in Jinja, Uganda, and the temporarily professed men of McCauley Formation House in Nairobi, Kenya. The candidates also choreographed a beautiful dance procession with the book of the gospels, which is a hallmark of the celebration of Mass in Africa.

The following day, January 4, both Jawaiambe and Nviiri were ordained deacons by the Most Rev. Damiano Guzzetti, Bishop of the Diocese of Moroto. The Ordination Mass also took place outside of St. Augustine's Institute in order to accomodate the large crowd of worshippers, which included Holy Cross religious, the men's families, and many friends of the Congregation in East Africa. 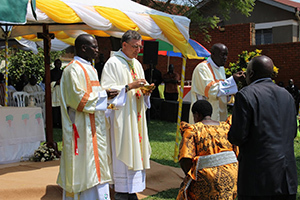 "Both ceremonies were most beautiful and joyful, with wonderful singing and dancing," said Fr. O'Hara. "Both Deacon Jawiambe and Deacon Nviiri are fine young men who have cast their lot with this 'great band of men.'"

Currently, Jawiambe and Nviiri are completing a Master's Degree in Theology from Tangaza University College in Nairobi, Kenya. After graduating in May, they will be assigned to one of the District's ministries, which span three countries: Kenya, Uganda, and Tanzania. 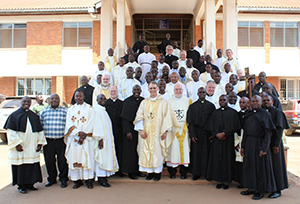 "I think that Jawiambe and Nviiri  represent something special about the next generation of men that Holy Cross is attracting in East Africa," said Fr. Pat Neary, C.S.C., the Superior of the District of East Africa. "They are men who strongly identify with Fr. Moreau and the foundational charism he gave us. They carry a genuine pride in being Holy Cross men and have internalized the sense of belonging to a unique religious family. Both are men for others and possess a zeal for service that our founder wished to see in his religious.

"I also feel that Jawiambe and Nviiri, like so many of our younger men, look towards the future with confidence and excitement. They are a reminder that Holy Cross in East Africa is steadily growing and that wonderful new opportunities await us."