Being Present When Needed Most

I am Br. Gilbert Denis Lasrado, C.S.C., the last of five children from a traditional Catholic family. My parents were farmers. My father died when I was just eighteen months old. I was brought up by my mother who was very religious and inculcated in her children Christian values. My mother wanted me to become a priest. She enrolled me in the parish school run by the Franciscan sisters. 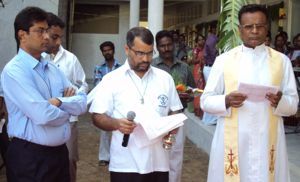 As a child, I was actively involved in the church as an altar boy. I also used to read in Catholic magazines and books the stories of missionaries and their persecution in the Soviet states. These stories inspired me to become a missionary.

My pastor wanted me to attend an apostolic school with the diocese so that I could discern diocesan priesthood with them. Everything was planned and arranged. Unfortunately, the priest who was to take me did not turn up.

Then the Capuchin friars wanted me to join them. A day before I was to go to join the friars, I met one of the Holy Cross missionaries, Br. Fernand Bessette, C.S.C., in the town riding a motorcycle. He was asking for directions to the convent school. I volunteered to lead him, and he gave me a ride to the convent school. He invited me to join Holy Cross. I said, “Yes,” and the rest is history.

To be honest, when I joined Holy Cross in 1978, I did not know the difference between brotherhood and priesthood. At the formation program in Bangalore, under the able guidance of Br. Aurele Tessier, C.S.C., and then Br. Donald Nadeau, C.S.C., I learned about religious life. Formation also helped be to become a responsible person. Our formators insisted that we speak the truth, and then be ready to face the consequences for being truthful and straightforward.

After five years as a candidate, I was still not sure what to do next. After graduation, while almost all of my companions left, I took a brave decision and entered the novitiate and made my first vows on May 27, 1984.

After my three years of scholastic studies at our seminary in Pune, I was asked to go to the mission in Mizoram as a temporary replacement. I liked the mission work and stayed there for four years, actively involved in school ministry among the displaced people of Burmese origin. While I was working there, I professed my Final Vows in Holy Cross on December 8, 1990.

Following eight years in school ministry, I was asked to help in formation work, first with our newly professed brothers and then with our novices at the Novitiate. This was a time where I was able to do a lot of personal reflection and introspection and grow in appreciation of my identity as a brother. In addition to some work in our schools, I have spent the last few years working as the steward for the Vicariate of Brothers in India. 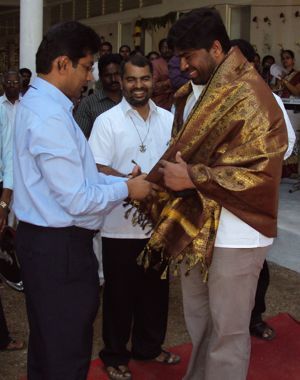 To be a brother in Holy Cross is a challenge and yet fulfilling. I am proud of my own identity as a brother. We Holy Cross brothers make a difference in the lives of the youth under our care. Our work with students, school drops outs, and youth helps me to realize the  vision of our founder to educate the mind and heart of our students and prepare them to be better equipped to face the realities of today’s world.

I firmly believe that what you are is more important than what you do. As a Holy Cross brother, I am happy to be a signpost to those seeking direction towards a happier and meaningful future. As a religious brother, it is far easier for me to get into the shoes of the people with whom we live and work, understand their problems, and reach out with a helping hand. To be a brother is to be present when one needs you most.

Br. Gilbert Denis Lasrado, C.S.C., is a member of the Vicariate of Holy Cross Brothers in India (Bangalore, Karnataka, India).