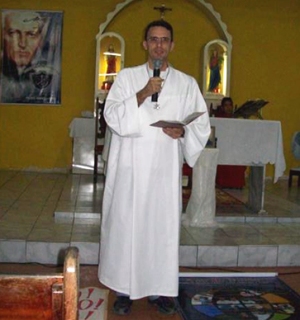 When I was a kid, my grandmother once said, “My grandson, you can be whatever God calls you to be!” At that time, I didn’t understand what she meant, but I never forget that sentence.

I was born in a migrant family. My grandparents went to the Amazon Region, escaping from the driest region of the country. I am the oldest of three children, with two younger sisters. I grew up in Belterra, a small village 50 kilometers from Santarem, the center of our Diocese. I loved to play and to study. My two grandmothers were zealous Catholics.

In 1992, at the age of 15, I started studying in Dom Amando School, a Holy Cross School in Santarem, Brazil. It was the place the brothers of Holy Cross first started their ministry in Brazil.

I was attracted to the school because of its academic excellence. I was an altar boy in my hometown, so a Franciscan American priest gave me a letter of recommendation. I gave it to the principal of the school, Br. Joseph Kinsman, C.S.C. I received a half scholarship, so my parents were able to send me to study there.

After two years of studying hard, I finished high school. I decided at that time going to state capital, Belem, for college. I started studying sociology at a public university.

After three years I decided to come back to Santarem to live with my sisters, who were moving there to study in a Catholic high school. I quit sociology. I was approved to enter the university in Santarem, studying Portuguese/Linguistics.

I was listening to a radio program, supported by Dom Amando School, when I heard: “You can change the world. Part of the destiny of the world is in your hands. Come and join us. Be a brother of Holy Cross.” I was attracted by that. So I decided to visit the formation house for brothers.

After one year, going to the meetings and participating in a mission in July in a poor community, I decided to live with the brothers. It was my final year at the university. I did my teacher’s training at Dom Amando. It was a great experience, coming back to my school, yet this time as a teacher.

I went to Sao Paulo for another year of formation. The following year, 2003, I did my novitiate. It was a good time of self-discovery, prayer, and growing in community life. We were five who professed First Vows on January 6, 2004.

My formation after novitiate began in Campinas, where we have Notre Dame High School and a social institution named Cecoia. I lived there for one year. I worked in the school as a teacher assistant.

In 2005, I had the opportunity to come back to Dom Amando, this time as a regular teacher. I was appointed to be a Portuguese teacher in the school. I felt happy to be in the school that I loved so much as a student. We educate hearts and minds, according to the teachings of Blessed Basile Moreau. For the next 2 years I taught there.

At the end of my initial formation, I went back to Campinas. There I studied English in a Catholic university maintained by the Diocese, and I made my final vows on September 9, 2011. 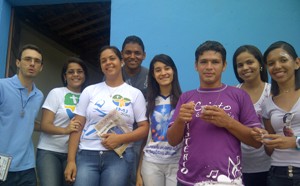 Today I am living and working in northeast Brazil, the poorest region in the country. We are three brothers and one priest living in a mixed community. As a vocation promoter, I visit young men and women, both in schools and in youth groups. We talk about the Christian life and our vocation as children of God to live and love.

I also work more broadly with the youth, helping them grow and discover themselves. This Lent we even put on a dramatization of the Way of the Cross.

I understand my grandmother now. We can be whatever God calls us to be. I thank her for the Christian education she gave me. I thank the brothers for the sense of happiness at being a brother, and I thank God for calling me to be a brother of Christ and a brother of those I meet along the way!

Br. Ronnie Silva, C.S.C., is a member of the District of Brazil (Campinas, São Paul).