On the heels of its largest Final Vows Class ever in June 2016, the Congregation of Holy Cross’s District of East Africa celebrated its largest priestly Ordination class ever on January 7, 2017. The Most Rev. Vincent Kirabo, Bishop of the Diocese of Hoima, presided at the Ordination Mass, which was held at the St. Augustine Institute Nsambya in Uganda. 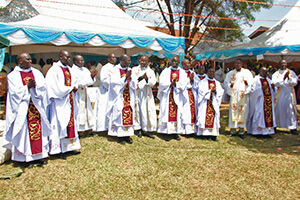 The large class drew a large crowd of over 2,000 to the Ordinations, including family members and friends of the nine men ordained as well as many of their confreres in the District of East Africa (Kampala, Uganda), led by District Superior Fr. Patrick Neary, C.S.C.

Making for an even more international event, there were also five brothers preparing for Final Vows from the Congregation’s District of West Africa (Cape Coast, Ghana) who attended the Mass.

Many of these people stayed for the festive celebration that followed, including lunch, the cutting of the cake, the giving of gifts, and, in true African fashion, dancing. 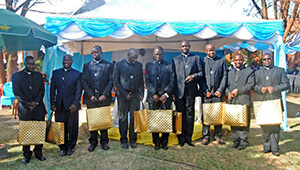 Fr. Neary has known this Ordination class since their arrival at McCauley Formation House in July 2011. At the time, he was serving as Director of the Formation House prior to his election as Superior of the District of East Africa in January 2012. Even from those initial days, Fr. Neary was struck less by the number of men in class, and more by the kind of men in the class.

“They represent a new generation of Holy Cross religious that in many respects mirrors a phenomenon that I see unfolding among our younger religious across the globe,” he said.

“This Ordination class is characterized by a deep personal relationship with Christ,” continued Fr. Neary. “As Pope Francis suggests, the touchstone of how deeply a priest is living his vocation is the extent to which he seeks Christ in his daily life.

“Another hallmark of this new generation is a conscious devotion to Blessed Basile Moreau, our founder, and an ability to not only articulate our charism as educators in the faith, and our spirituality of the Cross, our only hope, but to consciously express it in their preaching, their teaching, and in developing school mission and vision statements. They feel a conscious pride in identifying themselves as Holy Cross men, and they strive to internalize their vows as a sure path towards holiness,” he stated. 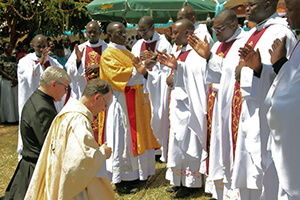 After underscoring their apostolic zeal, and in particular their “noteworthy” commitment to social justice and to the poor, Fr. Neary went on to highlight their commitment to community and the fraternal life.

“Most importantly, these men understand Fr. Moreau’s emphasis on fraternal union as a powerful lever for mission. They are true friends and brothers but they also realize that they must challenge each other in order to remain faithful and true to their call,” said Fr. Neary.

This year’s large Ordination Class in the District of East Africa is no anomaly. After a series of large Final Vows and Ordinations classes, and with a large host of seminarians in its newly constructed McCauley Formation House in Nairobi, Kenya, the District of East Africa, in the words of Fr. Neary, "seems to be on track to remain the fastest growing sector of the Congregation of Holy Cross."

View a Gallery of Ordiantions from around the World 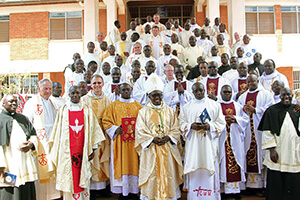 According to Fr. Neary, the tremendous growth in vocations, as well as the maturation of the Church in Africa, both invites and challenges the Holy Cross community there to “be clear about its core mission. There is a growing consensus that we must be educators in the faith and clearly this cannot happen without a commitment to schools. While we have two secondary schools and numerous primary schools, we dream about having our own university someday. To that end, we have sent a high number of our men off to pursue advanced studies.”

At the same time, in the spirit of Blessed Basile Moreau and the Congregation’s charism, the District of East Africa also sees the needs beyond its own borders. The District has already sent some of its members as missionaries to Canada, France, and the United States, and the hope is to enhance this missionary thrust in the future.

“We must train and provide men to work in those sectors of the Congregation where our numbers have diminished. Our mission must also cross borders of every sort, as our Constitutions remind us,” said Fr. Neary. “We want to give back to our brothers overseas who have given so much to us!"