Since their Final Vows and Deaconate Ordinations in 2018, the Congregation of Holy Cross in India has been awaiting in joyful hope the Priestly Ordination of 11 of its religious in 2019. Over the last two months, the last of those 11 men were ordained to the priesthood in ceremonies across the country. 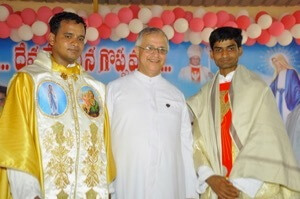 Frs. Chinnaiah and Bharath were ordained along with two other deacons, one a Redemptorist and the other a Fransalian.

All four were ordained by the Most Rev. Chinnabathini Bhaguaiah, Bishop of the Diocese of Guntur, in a Mass that took place on the grounds of Immaculate Conception Parish, Ravipadu, Guntur, Andhra Pradesh.

Both of the newly ordained have already been given their first assignments as priests. Fr. Chinnaiah’s first assignment is as Assistant Parish Priest at St. Louis Parish, in Dahisar, Mumbai, where he will also serve as house administrator. Fr. Bharath will serve as the Assistant Director of Formation and Vocation Promoter for Andhra Pradesh and Telangana. He will reside at the Ghanpar formation house. 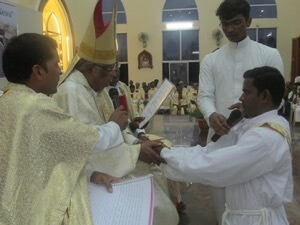 Then, the month of the May saw the celebrations of three Ordinations for the Vicariate of Tamil Nadu. Their men had previously professed their Final Vows on September 21, 2018, and been ordained deacons on September 25.

The first was on May 4, when Deacon John Kennedy, C.S.C., was ordained by the Most Rev. Thomas Paulsamy, Bishop of the Diocese of Dindigul. The Ordination took place in Fr. Kennedy's native village of Vakkampatti. He will now begin his ministry at Adaikalamatha Church in Tanjore.

Next up, on May 10, was Deacon Jesu Manickam, C.S.C. He was ordained by the Most Rev. Soosai Manickam, Bishop of the Diocese of Sivagangai. The Mass was at Fr. Jesu’s home parish in Ram Nagar, Devakottai. He will soon assume his new responsibilities at the Periakulam Parish in the Diocese of Madurai. 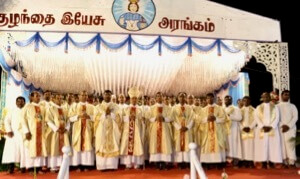 The Congregation kept Bishop Manickam busy. The following day, on May 11, he also served as the ordaining bishop for the Vicariate of Tamil Nadu’s third and final Ordination for the year: Deacon Antony Chellian, C.S.C. In keeping with the custom in India, the Ordination Mass was at his home parish in Thangachimadam, Rameshwaram Fr. Antony will begin his priesthood at the Ganapatjhi parish in Coimbatore.

Read news of other Ordinations for Holy Cross 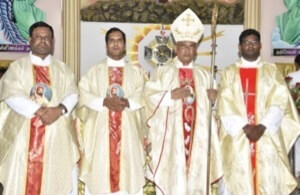 To bring the total to 11, the other three Ordinations were for the Congregation’s Province of North East India: Fr. Prasanta Basumatary, C.S.C., on March 3; and then both Frs. Jowelson Khongtani, C.S.C., and Marbilus Kharakor, C.S.C., on May 18.

Along with the 13 First Professions at the Novitiate in Yercaud, Tamil Nadu, on May 25, this has been a great year for the growth of the community and mission of Holy Cross in India.